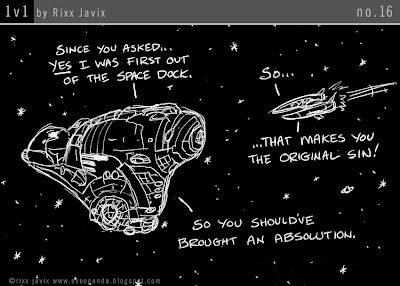 Click to embiggen!
I've decided to remove the word "Funnies" from the 1v1 posts.  The comics themselves have never actually been called "Funnies" as you can see from the one above and it has always sorta bothered me.  I'm not really sure why that started, I think perhaps in the beginning I was concerned that no one would know what I meant or if they were supposed to think they were funny or not.  Beside the fact that obviously they aren't all supposed to be "funny", I'm trying to aim for slightly more than that, although it varies week to week.  A lot of the strip depends on my mood at the time I create it.  For those that might be wondering, I create the strip immediately before posting it in an average of five minutes.  Some more, some less.  There are no hard and fast rules here at Eveoganda.
Either way, the official title has always been 1v1 and now the post title will reflect that.
There will not be a 1v1 next Friday.  I am now on vacation, and while Rixx will be posting next week, the man behind Rixx will not be.  And he is the one that can draw, Rixx has no skill points in art.  Some may argue about that other as well.
Fly safe this week.  And use your shiny new ORE ship wisely.
1v1 Humor