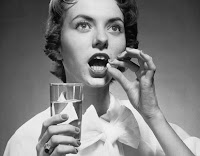 "Books" and "Ingest" are not usually two words that go together. Although I'm pretty sure there is a show about that on TLC, for most of us we tend to read books and ingest other things - like pills.

Either way this post isn't about "how" the ingesting of large skill books happen in a role-playing sense ( I've always assumed some type of cybernetic cortex download, something with lense flares and that blue lightning effect most likely ), but rather from a game mechanics sense.

This week I finally decided to train Light Missiles to V. It, and Cruise Missiles, are the last remaining weapon system that I don't have trained to T2. And while I doubt I will ever train Cruise to T2, with the upcoming changes it seems like a good time to train lights.

I already own the Light Missile Spec Skillbook, goodness knows I've probably had it in my hanger for nearly four years! So level V is training at the top of the Skill Que. I should be able to ingest the Spec Skill and place it directly behind the core skill so it trains next... but you can't do that. We all know the routine, we have to look around for another skill to train as a stop-gap. Usually something short. So the level V can finish, we can ingest the Spec and then place it on the Que behind the stop-gap skill.

From a mechanics perspective I can see why this was done, but it seems rather pointless. Mechanics exist to prevent or contain actions - but I'm having a very hard time figuring out what this mechanic is preventing or containing. If I already own the book and am currently training the V skill it seems natural that I'd want to train the Spec skill next, or not. As things stand now, the answer is always "not".

If we fix that issue however it opens up a whole Pandora's Box of other questions. Like why skill books have to be transported in the first place, why can't they be ingested when purchased and put into a "holding pattern" until the required conditions are met?

These questions are a larger context than simply fixing the V-Spec issue presented above. But they do address the fundamental issues involved with the system as it currently stands.

Personally I'd like to see a system that works like this: I buy a skill book and I can ingest it as long as I haven't already ingested it of course. If I do not already have the necessary pre-reqs for the skill it remains in "storage" until such time as it can be placed into the skill que. I buy the book and it gets plugged into my head to wait, probably on some kind of futuristic flash drive thingie.