Destroy All Things: Part One: Morals 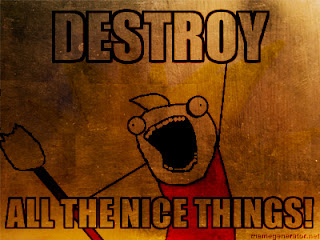 I've been a Pirate for over two years now. The moral quagmire that initially presented itself during my transition from "null soldier" to "pirate" have been long abandoned and rectified. That wasn't always an easy transition for me, but those days are over two years behind us now.

So where does that leave morality in the wake of being a Pirate in Eve?

Morality is always a tough one. Defining a moral platform from which to issue blanket edicts hasn't been the easiest thing for humans over our history, so far be it for me to try and do so on this wittle blog. But I think there is one rather universal truth from which we can make some observations. The Golden Rule as it is often referred to, or do unto others as you would have them do unto you. Treat others they way you'd like to be treated.

During the past two years my own moral platform has evolved to a similar basic premise that can be summed up rather easily as "Destroy All Things". And in this series of posts I'll be taking a look at what that choice means, from a moral, philosophical, financial, play and game play perspective when it comes to playing Eve Online.

So my moral platform is Destroy All Things. On the Tusker kill-board is this bit of genius that I like:
"The Tuskers exist to highlight the brutal inconsistencies of organized government through disruption of taxable activities, destruction of profit-generating capital, seizure of assets in support of our goals, and the murder of pilots not in harmony with our programme."

That kind of sums it up nicely I think. My own personal goal is to destroy whatever happens to be in space with me at the time. I make no real intrinsic value judgements based on age, ship, or corporation/alliance. Another ship in space is another target that needs to be exploded as quickly as possible. Which is all well and good until we introduce questions and gray areas. What about Rookie Ships? What about Pods? What about good fights and moral judgements on individual conduct? What about the odds?

And this is when the Golden Rule comes back around. Treat others the way you'd like to be treated. Well, I'd like others to hunt and attack me as well. It would make my game much more interesting if everyone else didn't turn and run when I enter local. I certainly appreciate an honest effort to destroy me. It makes things so much more interesting.

But, even so, I've been forced to develop some minor qualifiers to the general DAT theme. I can't just undock and attack local. I mean, that would be a play-style choice, but I also have other considerations. Primarily a sense of professionalism, my Corp mates and the value of things in which I fly. I don't have an endless bucket of ISK from which to draw.

So a moral foundation that exists between DAT and Do Unto has developed. This moral foundation derives from several important factors - wanting to fight as often as possible, wanting to avoid death, wanting to have fun and wanting to be good at it. Smash those things together, stir violently and you have the beginnings of a Moral Code from which to be a Pirate in Eve.

So while I do not hunt young players specifically, I also tend to not make a judgement on their age before exploding their ship in a belt. Ship in belt = warp in and attack. I may only discover their age and/or horrible fitting ability after the fact. That Algos could just as easily be incredibly well-fitted and flown by a booster implanted t3 enhanced killing machine as it is by a two month old player. My play-style doesn't always allow me the comfort of making before engagement or mid-engagement decisions, as those tend to get me killed in the process. It is mostly an all or nothing decision. Go or don't go.

And those decisions are typically split-second choices based on gut, experience and situational awareness - not morals.

From a moral standpoint, in-game, the sky is the limit. Destroy All Things stands within the Eve Universe as it cannot do outside of it. And that, for me at least, is the reason I play. From a Pirate perspective, moral choices play a very minor role in deciding how, when and why to play.

It is after all, only pixels.

In the next installment, I'll take this line of thought even further and examine the more philosophical questions that the Pirate lifestyle raises.