My Endorsement for CSM8 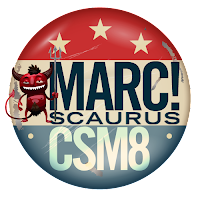 I've made my decision and, unless something horrible happens to make me change it, I am supporting the election of Marc Scaurus to the Council of Stellar Management 8.

Not only is Marc a former Tusker but we also flew together in my former Alliance "Burn Away" when Marc was in Sinners and a part of our Alliance. We got the chance to fly together even before they joined the Alliance and got to know each other pretty well during that time. Marc was always a daring and courageous pilot and I respected his opinion and experience. He was instrumental in the early success of the Alliance.

I also could have chosen any number of people to take over the Eve Blog Pack when it looked like I might have to quit Eve early last year, but I reached out to Marc first. I believe that says a lot about how I feel, given that the EPB was handed to me by the Blogfather CrazyKinux himself.

And while Marc and I haven't always seen eye-to-eye, our recent Goon arguments among the most public, I personally never believed those issues changed anything between us personally. And while I stand by my concerns regarding Goons in general and (the one who won't be named), I can also separate the people from the game. And Marc has made it clear that he will be leaving that organization.

Not only will Marc represent the interests of Low-Sec, but he will also help to represent all of New Eden. And I believe that is a critical and important distinction. We've seen far to many candidates over the years with agendas, or limited experience, or power blocs to answer to. And we've also seen what I believe to be great CSM members who are able to communicate and address concerns across the board, while certainly not forgetting who got them there. ( Hans! )

So I will be supporting Marc in his efforts to be elected to CSM8.

And I would appreciate it if you would as well.