Revenge is a dish... 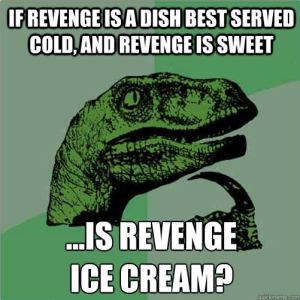 Over on the Mittani's news thingie someone called me out on a post about tears.

Also, Rixx Javix, I know you are reading this, you killed me when I was a newbie miner once. I was mad for awhile. Now I'm in null PvP-ing daily (not because of you, just a natural progression), but it's time for some sweet, cold-hearted revenge.

I am coming for you."


Oh boy. I get a lot of threatening emails, local rage, bounties, and other forms of hate/threat/anger aimed at me on a daily basis. It comes with the territory. I explode people in ships and they often don't really want to be exploded. Despite their presence in space where I happen to be flying. Which is counter-intuitive, but let's go with the facts.

This guy was a "newbie miner" once. That doesn't help things much, for him or for me. I never target a specific kind of ship to explode. As I've explained many, many times here at the magazine, I shoot everyone. So I suppose it is entirely possible that I exploded him once when he was a "newbie miner", cause I have exploded a lot of miner type people. I never do it out of malice, anger, revenge or to 'teach them a lesson'. I really don't think about it that much frankly.

"Now I'm in Null PvP-ing daily". Well that's good. I'm in low-sec (trying!) to PvP daily. (I've been sooooooo friggin' busy since getting back from vacation my Eve playing time has been zilch sadly) He brings this up because he thinks it'll scare me I suppose. He probably doesn't realize that I grew up in Null, my resume is rather solid when it comes to Null space. So fear is not what I think about when it is brought up. Actually the opposite.

His user name is "just got into -A-" which is also just an awesome thing. -A- and I go way back and I've exploded an awful lot of them in my career. I've also fought three wars against them, admittedly we lost all three of those wars. But I suggest that I wasn't a significantly contributing factor to those failures. Yet another reason why I left Null. That whole "not being a significant factor" bit bothers me.

I wish I could tell you that any one of the hundreds of threats I get ever turn out to be anything, but they just never do. Never. No one comes to hunt me down and make me pay. I really wish they would. I'd enjoy that very much.

So, to the former "newb miner" who just joined -A- and wants revenge, I say this. Please, please, please come and kill me. I hang out in Verge Vendor in a system called Hevrice. It is populated by over 150 close personal friends of mine, all of whom will stand aside and watch if you want a 1v1. And heck, I haven't even mentioned all the other pirates in local or in surrounding systems. Some of them might even help you. lol.

Come get me. Please.