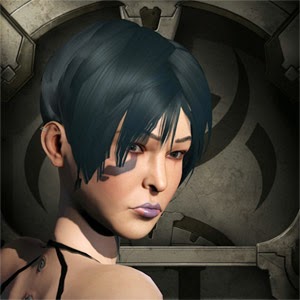 This post features Kaytee Aideron, a pilot in Lucifer's Hammer.

I'll try to keep this as short as possible but bear with me.  I started playing EVE in the last month or so of the Open Beta in early 2003 with some friends from the then struggling MMO - Earth and Beyond.  We'd all been hearing about EVE and what it could offer so we made the switch.  Upon going live we all pretty well split up and went our own ways mining and gathering what we could for our first frigate.  Blah blah, story continues for about a year with us mining, chatting, plunging into null and low and plotting things plus still learning the skills we needed. We finally all met up in TTI early 2004 after they were pushed out of Venal/Tenal and joined up with the C4 down in the curse area for some crazy and crashy nullsec bloc warfare.  I vividly remember losing my ship several times to the black screen after jumping into the opposing fleet and having grid load with me either in a pod or into mid/low armor waiting for that next volley to land (I always enjoyed fast tackle more than big and brawly), lol.

That all lasted somewhere in the neighborhood of 6 months or so until we finally had enough with the internal turmoil that had torn that corp from its previous allies and formed Tenax Incorporated.  We were starting to grow bored of the game because it couldn't handle large fleet battles, new things weren't coming out fast enough and CCP was really just STARTING to get their feet up underneath them.  So, we decided a high sec industrial corp with teeth was the route we would go for awhile to re-ignite that love for the game that we all shared.  We wedged ourselves into the middle of the Amarr/Minmatar role-players and played the role of the Caldari defending their fallen transports from the Minmatar guerilla attacks.  This provided some serious fun with wardecs against some Minnie factions and from Minnie factions and good small gang fights were had.  We were also decc'd for aggressively pushing other industrialists out of their markets by buying up their minerals and undercutting the hell out of them.

RL took hold after I met my wife and got really serious there and the corp also was starting to move our separate ways so we dissolved it and most of us rolled off of the game shortly after.  I sold off the characters I had at the time but kept one alt as I knew I'd be back someday!  Re-subbed in February last year and did my usual thing of manufacturing, mining (very briefly just to get started), and started learning the ropes with the 8 years of changes to figure out!

I had started to follow Rixx's EVEOGANDA as the stories were quite compelling and I wasn't finding what I wanted in the game itself but the readings I was finding were.  I had also started to brew my combat pilot just as Rixx started to broadcast about Stay Frosty and figured I'd give the -10 life a try for awhile.  Then there was talk about this indy corp and thats my main passion in this game so here I am in LH!

The fact that I can pew when and where I like and sometimes jump into a small gang for some super crazy gankage or good fights.

I've learned that 1v1's really aren't my game.  I've had some success and had some good learning experiences for sure, but I really prefer small gang so I try to make those events when we have them or jump in the roams when I can.

Learn to D-Scan, make safes/pounces, get a nice covert ops cloaky alt on a second account to find the explorers for you.  Ram your head into some more experienced pilots just to see how it goes and forget about that little 10mil isk ship you're in, its gonna blow up sooner or later anyways :D.

I'd have to say one of the funniest stories we had was during one of our war's in the past.  One of our more PVP oriented pilots tackled a Raven in his Thorax and was working that monster on his own.  We rally the rest of us to come and finish the job but by the time we got close he had already killed the damn thing himself.  Bear in mind that this was during the times when the Raven was the king.  I still don't understand how he managed to do that and no kill record (anymore) to look at the fail-fit that had to be that raven, lol.

His relaxed way of approaching the GAME we all love and play.
(EDITORS NOTE: Rixx is so relaxed people sometimes think he is asleep!)