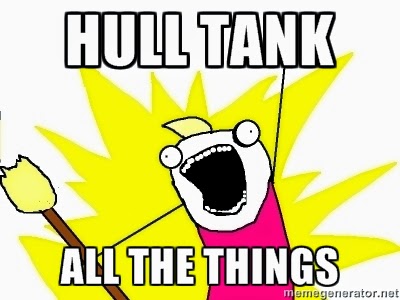 I am behind the eight-ball when it comes to recent changes in the nature of hull-tanking. A month or so ago we ran up against a hull-tanked Brutix that gave us all a run for our money and since then it has been sitting in the back of my head formulating. Waiting for a chance to give it a new run.

Hull tanking isn't new of course and we've probably all given it a try from time to time. There was a time when hull-tanking bait ships was a thing that often worked. But recently the idea of seriously considering a hull-tank as an option has become a rather viable solution. I know many people have been running various versions rather successfully.

The essential idea is to run up the amount of structure hit points your ship has to the point where it becomes enough to survive to see the benefit from all those extra low slots that just opened up. Let your Damage Control do all the work and keep your fingers crossed that the extra Mag Stab, the new found agility and speed, or the neut that now fits in the high slot, will be enough to win the day. The more low slots the better, the more base structure the better, essentially Gal ships seem more suited to this approach than the other races.

So much so that my newly hull-tanked Brutix Navy Issue is insane. Almost 95k EHP on top of over 1k dps, with speeds approaching the fastest Cruisers, the thing is a nightmare. But my opportunities to actually fly that ship in combat are rather limited, so I wanted to try something a tad more reasonable. So I picked the Comet as my guinea pig and started working out a possible fit for it.

Here is what I worked out:

(Except for the rigs, everything on this test ship was free loots! I love stolen things, just remember to repair all before undocking.)

Granted the Comet is not ideal, even with the 3x rigs and the bulkhead, EHP hovered around 7k with the DC II active. With the blasters packing dps it just might work, with drones, dps on this thing (depending on ammo) hovers around 250 on average.

As I've said many times before, I am not a EFT warrior, this was fitted in station and tested in space. So let's get to the space part. We won't count the unfitted Griffin that I found, or his poor pod, which was also empty. ECM needs to die, so even that started things off on the right foot. It took a lot of flying around to finally get a decent fight. Weekends are not the best for solo flying.

Finally an Incursus. And a pilot with some age to him, so this could be interesting. Apparently he thought so as well, since he did me the favor of not running away like the seventeen ships before him. I landed perfectly and off we went to the deadly dance. I must admit it is rather unsettling to watch your shields and then your armor disappear so quickly. Without any mods to activate you feel rather helpless about incoming damage. There is nothing you can do except focus on range and overheat your guns. It was a good fight but the Incursus went down.

Despite the victory I was not happy. The fight was closer than it should have been and now I'm left with a ship that has damage I can't do anything about. Normal people might scoff at this, but let me assure you that mitigating damage is an important part of me staying alive. As I've so often written about in these pages, successful PvP is about more than just winning the fight in front of you, it is also about winning the fight you haven't had yet. And my Comet is hanging in space with the only option being to find a station to repair in. That is a dangerous thing that was a tad unsettling.

As it worked out it was the thing that got me killed the very next fight. An Algos had appeared in local while I was fighting the Incursus and, of course, I collected my drones and went after it. I did have people in the next system over, so this wasn't as crazy as it sounds. Plus I've gotten rather decent at popping Algos' over the past few weeks. They are everywhere these days.

And while I did manage to get him into structure, the fight was decided before I even engaged. The lingering damage from the previous fight proved to be too much. And the trial was over.

The whole thing served its purpose however. I learned what I wanted to learn and got the chance to see it in action. I have to say that hull-tanked Comets will not become a regular fixture in my hangar. The ship just doesn't have enough base structure to make it a viable option in my opinion. To make it really work you'd have to sacrifice too much of the other things that make the ship viable.

As for bigger ships? It seems we've moved into a world where hull-tanking is not only a viable option, but an extremely viable option for certain goal based fits.

I will be curious to see how the new glass cannon mods will work with hull-tanking. That might just be a scary thing. Time will tell.