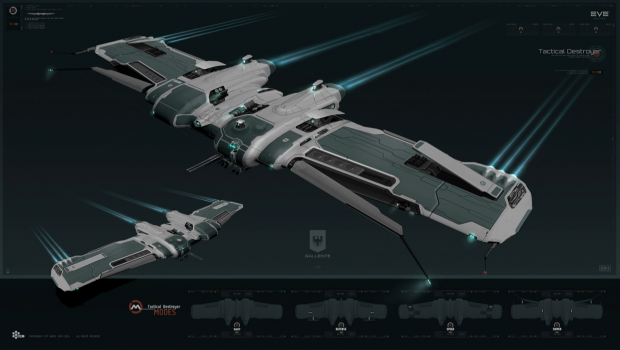 Today marks the arrival of the last of the racial T3 Destroyer's the Hecate! I'm excited about it and will be doing what everyone else is doing and trying to get my hands on one as soon as possible. Y'know, after finding and training the actual skill. Waiting for them to show up on the market and for prices to drop from the initial gazillion iskies.

It will be good to finally have the entire T3 Dessie line-up in-game, it seems like forever since they were first announced. But it hasn't been that long really. Probably about the same amount of time it used to take for a single expansion release. Back in the 'olden days.

If you haven't guessed yet, this post has no point. I took the day off yesterday to deal with some Alliance level Diplomacy issues that needed dealt with in the morning and then to attend yet another job interview in the afternoon. So my mind wasn't really on Eve yesterday and it takes time to get back into the swing of things. I did manage to finally undock late last night and promptly forgot everything I know and warped my kiting Worm into the jaws of a blaster Catalyst. With predictable results. Since everyone else was running away from me, I decided to drop down to a Rifter and see if I could get a fight. Nope. Everyone still ran away. A Worm, a Vexor Navy Issue, even another Rifter, all ran from me.

Life is often difficult for your friendly neighborhood pirate my friends.

It seems like every six months some new idiot pops up that strangely and without provocation friggin' hates my guts. I find the entire thing immensely amusing. It happens almost like clock-work, it is borderline predictable. Typically it starts with one person that suddenly and without much prior warning seems to decide that all of their issues, with life and the game of Eve, revolve around my continuing existence in their game. Typically these ranters have a few Toadies with them. Usually 1-3 even less intelligent hangers-on that believe justice will be served simply by ranting louder and more intensely than anyone else.

The funny part, and the part they can't be aware of, is how much like each other they are. And how often I've been thru this exact same thing over the past seven years. They each probably fervently believe they are unique. And this time Rixx will be brought low by their antics. They'll show me, teach me a lesson, show the universe what a wanker I really am.

Ladies and Gents, this is not news. I am a wanker.  If you click on that link you'll even see a video I made about it.

Ok break time is over, back to the business of being terrible at Eve.