on June 08, 2010
With the move North my time has taken a beating this week.  In addition it just happens to be an extremely busy time at work and at home, so the blog suffers a tiny, tiny bit.  As my loyal readers know however, I won't let that stop me from keeping up.  My promise stands after almost six months, every day I play Eve is a day I write a post.  Sometimes two.  Rarely three or four, but it happens.

I thought it would be fun while moving to take a look back at one of the propaganda posters I did and see what has changed since it was done.  This poster was created in September 2009. Click HERE for embiggened version
Sev3rance:
Kicked out of their Providence home, Sev3rance was one of the first holders to leave the region.  They headed north and joined the Northern Coalition to help in the fight against SC.
Paxton:
Paxton was the last holder Alliance to remain in Providence.  Grudgingly allied with a low-sec roaming CVA, Paxton held firm for as long as possible.  Early hopes that a "trench-warfare" peace with the New Providence would hold, proved a bit silly.  Paxton left for low-sec and leadership failed.  The Alliance disbanded for all intents and purposes.
Libertas Fidelitas (LFA):
Or the "scape goat" if you will.  LFA was blamed by many as the reason -A- took D-GTMI back in January.  The truth is much more complicated than that, but the results are the same.  They say that nature abhors a vacuum, and so apparently does Eve, as LFA was caught between their Holder's agreement with a role-playing CVA and common sense.  LFA slowly bled Corps and disbanded.
Cold Steel:
This is the one I know the least about.  I flew with Cold Steel on many, many occasions but I have lost track of them since the fall of Provi.  Dotlan reports they have 205 members and 6 Corps, but do not currently hold sov or outposts anywhere.  If anyone knows what has become of Cold Steel, please feel free to update us in the comments.
Aegis Militia:
I had heard that AM disbanded, but Dotlan is showing they still have 83 members and 4 Corps.  That might just be the usual result of people who haven't logged back in yet, or they may be trying to hold on like Paxton.
And of course, CVA:
It's funny, the poster touts unity, "United We Will Win" and it was the fact that we were never united that destroyed CVA Providence.  When the chips were down CVA turned its back on its Holders and hid behind the Role-Playing excuse.  We all realize that any intelligent person could have used that to any advantage they chose, the fact that they didn't says volumes about their character in my humble opinion.  Despite what some people have said, I am not anti-role playing.  I don't play that way, but I can see why some people might choose to do so.  That is their choice.  I am anti-asshole though, anti-dunce, anti-stupid and seriously anti-fail.
What will the future hold for CVA?  Lol, I don't care anymore.  Yippeee.

PS: For those that might be interested, here is the WW2 poster that I used as inspiration: (Not sure why there are horses on this, they aren't part of the original design.) 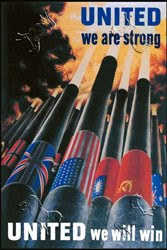