on July 16, 2010
After a two-week break, the world's greatest Eve related single-panel black and white comic strip returns!!  This time with, some might say, a darker more political bent?  I dunno about you, but I grow increasingly weary of dying to laggy gate mechanics than just about anything else in the game.  Let me fight another pilot toe-to-toe, but dying because local won't load after a jump is just plain silly in my book, and frustrating.  Huh... did I just over explain the strip?

See what happens when you take time off!! 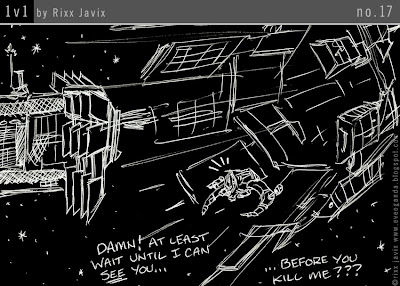 Click to embiggen!
There once was a Pirate from Evati
Who flew a Myrm, hey!
He thought a Drake he'd catch
But he ended up losing
his own Celebrity Deathmatch
1v1 CDM Humor