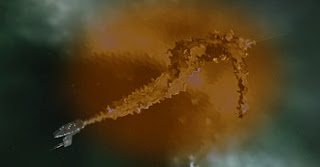 
For those that may have been expecting the "Phalanx System" today, you'll have to wait.  Sorry but the post ran into some technical difficulties.  In the meantime, this is even better!
Imagine you are surrounded by those awful interceptors that have kilt all your drones... what do you do?  Except die?  Well maybe and maybe not, especially if you had fit the Microwave Cloud Burst module in your mids.  What does it do and how can it help?  Well it emits an area of effect 'cloud' around your ship that causes the enemy ship's modules to overheat.  I'll let that sink in for a minute.
(All the credit for this one goes to Angor, we were shooting the breeze on these and he came up with this gem.)
Those lousy no-good interceptors now have something else to consider when getting up close and personal.  Suddenly their high, mid and low slots are overheating on them.  If they were already overheating a slot, then the effect is even worse.  If they don't gain some distance soon, they might just lose their micro warp drive, or worse.  Hope they didn't forget to pack extra Nanite Paste.
The MCB is based on deadly microwave technology and emits a cloud around your ship that effects ships within its area of effect.  (As well as make popcorn!) Ships caught within the AOE experience varying degrees of module overheat based on the skill of the player, the distance from the emitting ship (and cool MCB visual graphics) and combined mathematical formulas and if/then statements.  I dunno, the usual stuff.
This is nasty but it doesn't blow stuff up, it only causes an effect on ships trying to blow you up.  It seems better suited to BS class ships perhaps, something that can survive long enough for it to even matter.  But I like the passive nature of it as a defensive solution.  Although I think some offensive uses could be imagined, such as warping into a tight gate camp and overheating those around you. Lol.
Give it some thought and see what you think.  Does it make Eve Gooder or Funner?  Or neither?
Based on comments (thanks as always) and some additional thought, maybe this becomes another Bomb option?  We already have lock-breakers, maybe an overheat bomb would work?  It sure would put those gate campers at a disadvantage.