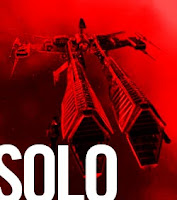 "What good is a reward if you ain't around to use it? Besides, attacking that battle station is not my idea of courage. It's more like, suicide." - Han Solo
In yesterday's post I stated that the Noob player shouldn't fly alone, that he should seek the company of others.  In fact I stated it pretty firmly by saying you "should never fly alone."  I stand by that statement because I believe the Noob player will fail at flying solo more often than not, get extremely frustrated and quit Eve.  I don't want that to happen.
If you learn anything at all about Eve you should know this: Eve is a game of exceptions.  In fact there are few hard and fast rules about Eve, that is both the fun and the misery of the game.  Anyone that tells you something IS a fact, should be looked upon with at least a modicum of suspicion.  They're probably wrong and some smart ass will be more than happy to point of their error.
That is Eve.  It is open-ended and allows for an almost infinite variety of fits, skill levels, experience, knowledge and playing styles.  Such near infinite variety drives some people bat shit.  Others revel in it.  I like to revel.  But such near infinite possibilities can sometimes make the job of the blogger extremely difficult.  If I tried to write about every contingency these posts would be very long indeed.  And no one wants that.
Can the Noob player fly solo?  Of course they can.  Has anyone done it successfully in the past?  Of course they have.  But the vast majority will not.  The vast majority will die and die and die more.  That experience can either be the cauldron in which a great character is born, or more likely, the death of yet another player.
I love flying solo.  I'm no expert at solo fighting, I openly admit that, but I've had my share of solo kills which I am proud of.  If I had to choose any ONE playing style in Eve at the expense of all others, I would choose to fly alone.  Fortunately I don't have to choose just one playing style, so I choose them all.  I also choose to mainly live in zero space, so the solo opportunities are harder to come by without getting blobbed.  I still fly solo sometimes.  And sometimes I get lucky.  And sometimes I don't.
(Btw, I'm glad I don't have to choose only one playing style, not only do I enjoy doing a little of everything which keeps the game interesting, but I also enjoy flying with my Corp m8s.)
This morning I read a post over on another site about someone attacking a gate camp solo, maybe six or seven ships, in an Abaddon.  He managed to kill two of them before they killed him.  This is a pretty typical example of the type of thing many players enjoy.  And I'm not saying anything about that playing style other than the fact that it is not my playing style.  I wouldn't do that unless doing so had some strategic value, or I was saving a Corp or Alliance m8.  To my way of thinking attacking that gate camp solo, knowing you'd lose a Battleship in the process (probably not killing enough ships to at least equal the value of your death) is foolhardy.  And I totally get the fact that that is the whole point, again I am not saying anything negative about how others choose to play the game.  Only how I choose to play the game.
So my advice for Noobs is to find a buddy.  Not only does it make survival more likely, it also improves the playing experience.  Sharing the experience with friends in a group, or a Corp makes Eve more fun to play.  It can also help to make you a better player.
And if, every once in awhile, you get the urge to fly out into space alone... for goodness sake do it.  As in everything in this game, you won't know unless you try.
Ingame Opinion pirate PvP