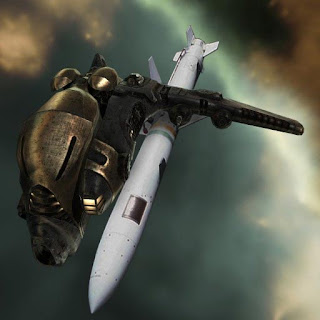 [ Gooder Eve is a series of on-going articles that examine ways in which Eve might be "gooder".  Some are serious, some are not supposed to be, but all are intended to generate debate and healthy argument. Which they have, in spades sometimes. Either way you land, I hope you enjoy.]

As I discussed in the last two Gooder Eve posts about the role of the Titan in Eve, in my opinion Cap ships are a tad out of control.  Not to mention Super Carriers and assorted whatnots.  I'm pleased to see that those two posts caused such debate around the neighborhood, that was their intention.
Today I follow that series with one that focuses on the other side of that equation - killing them.  Let's assume for a moment that no changes are made to the current state of affairs, Titans and Super Carriers go on their merry way as is.  Which is fine, but I'd much prefer a new way to make their lives much, much more difficult.
Introducing the Cap Buster!  Once again we put the fate of New Eden back into the hands of the individual pilot.  The Cap Buster is ONE missile, a fire and forget behemoth that can only be carried by a stripped down Interceptor.  It isn't complex, it is big and stupid, but should it actually hit its target it can deliver a significant amount of punishment.  Too much you say?  Maybe, but let's consider for a moment the details.
The interceptor is stripped down significantly, so its only offensive weapon is the Cap Buster.  The Cap Buster is so large that it also generates a pretty hefty -25% to maximum speed penalty, which slows the interceptor down.  Also, since it is a stupid missile, you have to be pointed at your target to fire it - it goes in a somewhat straight path after launch.  (Much like firing a bomb from a Stealth Bomber, with the added random chance that it just flies off in a random direction.) The Cap Buster, like a bomb, would have some radial damage but the significant delivery of death would be focused on the target.  Would one Cap Buster be enough to kill a TItan?  No, but two or three?  Maybe.
So Cap Buster swarms?  Dozens of these little bees swarming around your Cap fleet?  Maybe, but remember they will be extremely easy to kill, significantly slowed down and stripped of all but the basic mods, these Cap Buster Ceptors would be annoying but not balance killing.  But they would be deadly if they got thru and delivered.  This would give those that use their Cap Fleets without remorse something to think about the next time they form up.
What are your thoughts?  If it isn't the Cap Buster, how else can we work to balance the Super Cap advantage?  If there is one.
gooder Opinion