One Year of Hats

on June 18, 2012
This time last year Incarna was driving us all a tad crazy. The limitations of the CQ, the rumors of micro-transactions, the leaks, the memos, the upcoming Jita protests, all of it was swirling about our heads. It was, in so many ways, a pretty nutty time.

It just happened to coincide around the same time I started my new Twitter account. Just like in-game, in Twitter so much of our "characters" are represented by our Avatar's heads. When Monocle-gate broke, it seemed like a short distance to putting hats on our avatars. And so, I started a mini Twitter based protest against Aurum by putting hats on Rixx's head. This was the very first one: 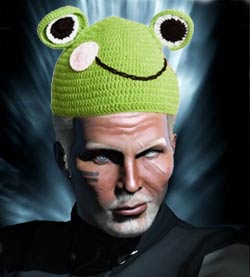 Every day during that first two weeks I changed the hat. You can see them all by visiting the ever-growing Twitter Hat Collection Page.  Once the protest ran its course the hats had become so popular that other characters began asking for their own hats. And now, a year later I've made over 200 Twitter Hats for my fellow Tweetfleet members. With about 30 or more on back-order at the moment. ( I will get to everyone, I promise.)

Along the way several people made their own hats and a few others started making fake RJ Hats, which is fine, but there is only one true collection and one authentic Twitter Hat. I'm extremely proud of the hats and the fact that so many people still request them and still wear them a year later. It is a pretty cool feeling scrolling thru the Twitter feed and seeing so many hats.

More than once it has come up in conversation that CCP should seriously consider offering hats to our in-game avatars, much the same way they already do for shirts, shoes and jackets. Such an offering might look like this:


Obviously each race could have their own unique styles, but the options here are limitless. You only have to scroll thru the 200+ hats in the collection already to see that duplication is not an issue. Serious, silly, badass, fluffy, the range of hats is limited only by your imagination. And, if they wanted, I'm sure some hats could only be available with Aurum in the store thingie.

Would such a thing be a sell-out of the original protest? I don't think so, since we seem to have achieved the goals of the original series rather nicely. That was last year anyway. Time to move into the future.

CCP it is time for in-game hats. At least as an option.

Leave a comment and let CCP know that you support this important and completely meaningless initiative!! They read this blog, let them know how you feel about hats. Even if you hate the idea. Dialogue, debate, is good for the soul.