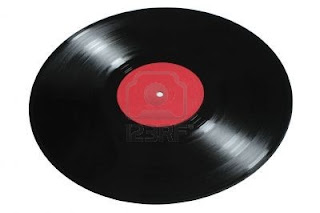 There is a new thing in New Eden. And from what I've been able to gather it involves the collection of old vinyl LPs.

The gimmick is this. In Faction Warfare systems there are these triangles in space that are called Minor, Major, Outpost, and other names that I don't remember. The point being that it takes an acceleration gate to get to most of them.

Inside these triangles are a bunch of rats protecting a square thingie. The rates aren't important because they won't shoot you as long as you don't shoot them. I think. This makes sense, because apparently you shouldn't FIT GUNS on your ship!!?!?

In fact, may of the proponents of this record collection hobby insist that you shouldn't bother fitting your high slots at all. Just warp in and orbit the square thing. Once you start doing that a timer starts counting down and once it is finished BING you've collected some old records you can sell.

From what I hear these records mostly consist of old K-Tel offerings, Greatest Hits collections ( the Mamma's and the Pappa's, Sheena Easton, Yardbirds, Monkees and assorted warblers are among the most popular.) and children's sing-alongs. I could be wrong here and the types may vary by Militia.

The trick is, again this is all mostly from second-hand knowledge ( but my sources are solid!), you can't sell your records until something happens. This "something" is a bit of a mystery, it involves one of the races entering a contest and getting a great score from the judges. I suspect this is like our version of American Idol perhaps? This part needs more information.

But those that partake in this insanity swear you can make BILLIONS OF ISK!! With a 'B".

I tried selling my old record collection a few years back and the guy at the store only wanted to give me ten bucks for them. So this seems like a good deal to me.

All I know is that these record things must be worth a lot. Every time I warp in on someone collecting them they run away and hide.

As for me, I've moved on from LP technology into CDs and now digital, so I have no use for old vinyl records. Expect for the ones I kept. I mean really, ten bucks?! That was an insult.

If anyone is interested I suggest learning more about this LP Store and the profits you can make. But I won't be doing it. The only ship I fly without guns is my pod.