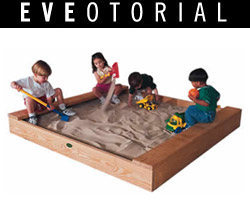 Notice how everyone in the picture has found their own corner to play in? Except for Lisa and Justin, who seem to have worked out a common relationship. It won't last however.

Anyone who has children probably knows all about sandboxes. They are not pleasant places. The box itself is usually not very nice, old, full of cat poop, weeds, wet sand, spiders and other nasty surprises. Last year we had a hornet's nest in ours! And like any true PvPer my job was to exterminate the Hornets.

Unless you are blessed with perfect children ( and we all know the truth about that parent lie! ) kids do not play well in a Sandbox. Not for long anyway. It is amazing the sheer amount of bullshit we are all born with. The politics, the game playing, the advantage seeking, it is all in there somewhere deeply buried in our lizard brains. It is, after all, what makes us human.

Eve is a sandbox game. At the core of the Eve experience it is this fact alone that makes Eve special.  No one can tell me or you what to do in this crazy sandbox of ours. You undock and go about your business making choices that can be yours alone, or you can advocate those choices to others, or just sit there on the undock, or dock up and walk around the CQ, for goodness sake feel free to... whatever you want. On the flip side, just know that every decision comes with consequences. Just like out here in good 'ol real life. Action and reaction. Cause and effect.

It has been with some amusement then watching Ripard tell everyone about my former Alliance's plan to rid Syndicate of "others".  And then strangely back off from the edge. And then my debate buddy Mord Fiddle come out on the other side of that.

They are both right of course. As much as I would love it if everyone played the way I play, that isn't going to happen. And no amount of ranting about it is going to change that. On the other hand, if I would so choose to make that my "thing" and go around in-game trying to force everyone to play the way I want them to... well then, I could. Making that decision however means facing the consequences, the horrible feedback, mockery, disdain, forum flames and everything else that comes along with it. I'd need to be extremely determined.

And, lucky for us, there are plenty of people out there in Eve who are determined. God bless them. Thank you for the nut-bags, the wing-nuts, the ego maniacs, the strange, the solo, the hidden, the conquerors and the vanquished. I celebrate you all. What would Eve be without CVA? Without the Goons? Without the planet sized ego of The Mittani? Without gankers, wankers, and people scared of their own shadow? Or Shadow for that matter? I could go on for a long time here.

I support RK's public declaration of insanity. Bully for you guys. Enjoy the wave of sand encrusted feces headed your way. It takes some big ones to so obviously announce your intentions for everyone to not only mock, but suddenly be aware of. And I get the point btw, so don't bother trying to tell me I don't "get it". It isn't complicated.

It won't work though. But that doesn't mean it won't be fun trying.

I would never tell anyone else how to play Eve. I might ask a few of you to join me from time to time and go in a certain direction, isn't that what Corporations and Alliances are all about? But I believe in the sandbox. And so, I may shoot you for playing the way you've decided to play. Or, I may mock you in these pages for your choices. That is also my right.

It is just as much RK's choice as it is anyones. This is a sandbox after all.

And now for Part Two.

The sandbox has changed. RK isn't the only entity that feels the changes, goodness knows I'm hearing it all over the channels lately and feeling it out in space. And I know this is going to sound somewhat 'bitter-vet' but compared to the years that have come before, it doesn't feel the same. And I admit that the change I'm talking about isn't necessarily a negative, only that it is different.

Let me give you an example. It wasn't long ago that you could warp yourself to the top belt in OMS and be assured of a fight. Goodness knows I've done it many, many times. It was often the perfect ending to a long roam. And there are other places in New Eden like that. Back then the chances of being ganked to high heaven were about 1 in 4. Which isn't horrible odds. Now the chances of being ganked are more like 3 in 4. And I'd say those odds are pretty much true everywhere in low-sec. ( My apologies, it happens to be where I play )

All Summer I have been primarily focused on my solo work and I have travelled as much as I can across the "western" side of the map. During that entire time the ONLY people I've seen in belts have been young players. Under 12 months. The belts are empty. That didn't use to be the case.

Frustration is a huge force for change. And I believe the RK declaration stems from frustration. Heck, I share many of those same frustrations. Yesterday three ships ran from me in a Slasher! They would have most likely killed me and they ran away. And yes, I often attack even when I think I might possibly lose. If you don't, then you will never win.

The sandbox has changed. And it will continue to change. And some people are not going to like it.