GCC: The Stand in the Corner Mechanic 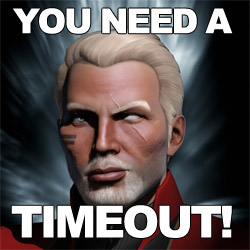 So yesterday four of us went out on a fun, impromptu Frigate roam. A Merlin, Slasher, Executioner and a Vengeance (so almost all Frigates lol ), the point being we were in small ships. The roam lasted about 45 minutes or an hour until we blarped ourselves in a stoopid manner and most of us died.

But here is the real point. Let's say it lasted an hour. 45 minutes of that hour was spent under GCC. And because we were in small ships that meant floating in space not playing Eve.

Now I know most of you non-PvP or non-low readers are saying to yourselves "so what?". And honestly that is a fair question, so what? We don't have to explode people in their ships, act like crazy people and kill everything we happen to come across in space. We don't have to do that. And choosing to do that should come with some form of punishment, shouldn't it?

Well rest easy my strange non-violent friends, because our lifestyle choice comes with plenty of punishment. So much so in fact, that I often wonder if this is a PvP game or an economic simulator set in space. I happen to agree with you by the way. Attacking a fellow pilot and destroying his or her precious ship should indeed come with a penalty. (Full disclosure however, if CCP announced that GCC would be done away with completely, I'd be 100% in favor of that decision! But, since I seriously doubt that will ever happen, I have to say I support "some" type of punishment.)

Remember when there used to be a timer when you docked your ship? You couldn't dock and then just undock again, you had to wait for the timer to expire. This went on for years and we were told this was a protection mechanism to help keep people safe. It was probably more an issue of server load frankly and it is a welcome relief that it is gone from the game. So it is possible to eliminate mechanics that make no sense and not have their removal negatively impact the game itself. Does anyone feel less safe now that the docking timer is gone?

The current system of Agression/Criminal timers doesn't work very well. The punishment is a "dumb bomb" approach to a "smart bomb" problem and it desperately needs to be updated to modern times.

One of the biggest complaints I heard in regards to my recent Bounty Hunter suggestions was that System Sec Status is a meaningless designation. Which is roughly true. But the reason I suggested tying  something to that designation was to help make it a meaningful designation. It only means something if we actually use it. Otherwise it should be done away with. Anything in the game that serves no purpose has no place in the game.

So then, accepting all of that, what should be done?

If it was up to me I would implement a system of "scale" to the question of GCC and I will explain how that would work:

1. One Timer to Rule Them All

Yellow and Red Aggression and Criminal timers are ludicrous and meaningless. I warp to a belt and the rats shoot me and I get an aggression timer? That makes no sense at all. We need one global timer in one convenient color. This isn't just a Pirate issue as it would affect all pilots. Unless you aggress you shouldn't have a timer, period. Simple.

Every pilot has a sec status rating as well. Generally speaking the more dangerous you happen to be the lower your rating. ( And yes, I am fully aware that this doesn't really mean that in all cases.) So the lower the status of the pilot the more dangerous said pilot is to the general population the higher the penalty he should expect. And the opposite. Simple.

A Frigate is less dangerous than a BS. (Again, we are talking generalities here) So if I attack someone in a Frigate I pose less of a danger than if I attacked in a Battleship. There should also be consideration given to the ship class involved, since Frigates are less able to withstand gate and station guns they should be penalized less than their more robust cousins. Simple.


The maximum timer is fifteen minutes and the minimum timer is one minute. This maintains the stated "cooling off" effect that GCC is supposed to promote and allows adequate time for even the dumbest pilot to seek safety from his aggressor.

For me personally, this system could very well mean no changes AT ALL to my game play. Since I am an evil rotten scum sucking pirate, I could end up with 15 minutes of GCC every time. But at least it would make sense, be one easy to understand timer and maybe result in less time if I choose to fly smaller ships. Oh yeah, it would also encourage more small ship flying.

This is only one idea, sure. It may not even be the best idea. Just writing this I came up with some other ideas that sound pretty good in my head. Maybe those would work better. At this point, it isn't hard to imagine a system that works better than the one we have now.

And isn't that a good enough reason to fix it?