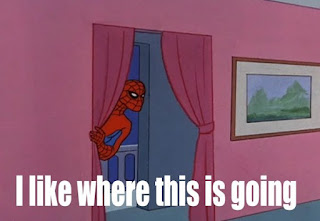 And I wasn't even playing Eve yesterday. Oh sure, I was on-line a couple of short times, but I had no intention of actually playing. I had a couple of minutes here and there, so I logged on just to see if I could catch a quick kill or two. Earlier in the day I did manage to catch a Thrasher.

It didn't look good. The system was pretty full, a Pilgrim, Proteus, an Archon and a few other ships on scan when I undocked. Sigh.

But I figured to stick my nose in that mess and see what happened. Everyone docked except the Pilgrim. But then it did a few times before undocking and deciding to attack me on station. We were both negative so no aggression, so I sat there for awhile - curious more than anything. Sure enough the Proteus undocks.

Despite my usual quiet nature some words were exchanged in local. This happens when my former Lucifer's Hammer corp mate Itsme is in local, he tends to bring out my worst nature.

I docked up and grabbed my IN Slicer for a quick roam and warped to the out gate. As I did so the Pilgrim pilot left local and a Rupture appeared on scan. And this is the teachable moment kids - stay on course! I should've left local and went hunting. But instead, I turned around and went and got the Sac to kill the Rupture.

By the time that happened he had docked up, so I waited. I even let a few other targets get away, the Rupture being much more tasty a prize. ( If I had killed even one of those I would have had GCC and been off station and the following wouldn't have happened ) The Rupture undocked and I jumped on him.

My spider-sense tingled when he pointed me without shooting. Just as that thought was hovering in the air above my head, he lit the Cyno. I immediately de-aggro'd and aligned out. Which is exactly the perfect response. In this situation you only have one chance, that the incoming gang is slow to jump. With GCC the station timer is too long, so burn away!! But the Sac is slow and the incoming gang wasn't.

I did get the pod out. Aligned.

We exchanged words in local. I was laughing. They were bored. I appreciate being hunted and trapped and killed in such a way. You really have to appreciate the effort for one Sac. It probably cost more in fuel than the ship was worth. And at only 2.4 pts on BC, well it boils down to more fun than anything.

Plus, strangely enough, for the first time in three years - I had insurance!

If it hadn't been for the Falcon I would've taken them. ( Probably not, but it's fun to say ) Well played gentlemen. Well played.