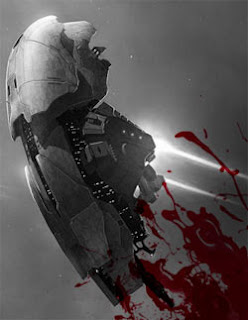 The Oracle is a decent enough ship, not horribly expensive or anything, but certainly not cheap either. It isn't a great solo ship, so you usually see them in small gangs or fleets doing what they are designed to do.

So it was somewhat a surprise the other day to see one alone on d-scan. It was either undocking or docking at one of the stations, I couldn't tell which since it disappeared as I landed. I thought about camping, but I figured if he saw me he'd just dock up again.

So I warped to the gate, turned around and aligned back to the station. Stopping about 4 or 5k from the gate. I really shouldn't give this stuff away for free - but that is GTFO Stance on Hi-Sec Gate #1. Just for reference. I should probably explain. A hi-sec gate is one of the most dangerous places for a pirate to be. You can't escape by jumping the gate, because it is hi-sec carebear fantasy land over there!! And you have no scout on the other side, so anything could be jumping into you without warning. This makes it really cool to just sit there like you don't care. But I also align and burn out from the gate a bit. Why?

If the pilot coming in knows what they are doing you will not catch them. They will land at zero and just jump, I imagine they are also giving me the middle finger as they do it. However, if they think they are safe, or are being lazy, or they are stupid, they might just land off the gate. ( It happens a lot ) And then they are dead meat. 900 dps, web, scram, go boom!

So sure enough, the Oracle undocks and warps to gate. Again, this is pretty rare to see one out flying alone. He lands off the gate and I pounce on him and do that thing to his face. I'm nice and let his pod go since he was kind enough to give me a solo Oracle kill. ( Plus I had GCC issues and I wanted to loot the wreck for tasty treats!)

Then I look at the kill mail to see what dropped.

It is hard to explain this one. A week old player flying an Oracle in low-sec with missing mid slots, no low slots, no rigs and no ammo? I can only imagine that this must be the alt of some other more experienced player that bought the ship and is using this guy to move it. Or he was at a POS bash and burned his ammo... but that doesn't make sense. I'm really trying here.

I suspect laziness must be at the heart of this one, but it is a mystery. My email to the pilot remains unanswered, so we may never know.

Whatever the answer is I appreciate the opportunity to explode it. People shouldn't be flying un-fitted Oracles in low-sec. And if they do, they should be exploded. So everything went exactly the way it should. It just bothers me that this might be going on in a regular fashion and people are getting away with it. I may need to play more.