Pirate: What does it mean? 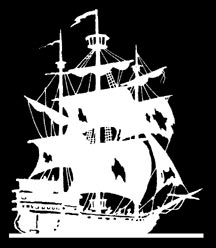 pi·rate  (prt)
n.
1.a. One who robs at sea or plunders the land from the sea without commission from a sovereign nation.
b. A ship used for this purpose.
2. One who preys on others; a plunderer.

v.intr.
To act as a pirate; practice piracy.

What does it mean to be a pirate in Eve? And what makes being a Pirate different from being a PvP'er, or a Ninja, or a Merc, or a Soldier, or any number of other things you can be in New Eden?

First of all I will freely admit that I am rather harsh in my own definition of what it means to be a Pirate and I am certain there will be others that do not agree. Which is fine with me, but this happens to be my blog and I happen to be the only writer. So here is what, in addition to the above RL definition, I believe it means to be a pirate in New Eden:

1. You must be -10 or well on your way there. And you must stay there on purpose.

You can't flirt with negative standings, jump in and kill a few things, then work your ass off to get back to positive. That makes you a criminal, not a pirate. It is also fun and I enjoyed doing that myself for years, but being a "pirate" is a life-style ( play-style ) choice, not a hobby.

2. You must primarily make your living from being a Pirate. Looting, Ransoms, etc.

This is the hard part. Given the negative standings thing however, you don't have a lot of other choices. This doesn't mean that you can't have alt accounts that make you isk in other ways ( although I choose not to ), but having a lot of isk to draw on is counter to being a real pirate in my humble opinion.

So, so far we have someone that robs, plunders and preys without approval from a government. Someone that has negative standing and primarily makes their living from being a pirate. So what else?

And here comes the undefinable bit, the part that sorta, kinda "depends" on your personal perspective. And in many ways, the very, very hard part. The Code. In my opinion what separates a pirate from a criminal or psychopath is some sort of internal code that he lives by. History teaches us that real historical pirates lived by a code of conduct or Articles of Agreement.  These varied from Captain to Captain but they shared the same fundamental rough outlines.

When I ran my own Pirate Corporation we had a couple of rules, or a code. Mostly this had to do with simple things like always honoring a 1v1, or how to split up loot. The Tuskers have famously taken this to yet another level and when we become a Tusker we swear an Oath to abide by The Tusker Code. Which again, is mostly about honor among thieves.

I personally take the Code extremely seriously. In fact, I even take it to a whole other level. I'm going to keep most of that to myself however, as I've learned over the past two years to keep my mouth shut about it. Suffice to say I have my own internal code that is even more harsh than The Tusker Code and I play the game by my own internal sense of right and wrong.

Which is exactly like a Pirate. A pirate is independent, will-full, strong and doesn't take orders from anyone. We stick together simply because we happened to find a few mates that agree with us. Mostly.

I pulled this from The Tusker killboard:

"The Tuskers exist to highlight the brutal inconsistencies of organized government through disruption of taxable activities, destruction of profit-generating capital, seizure of assets in support of our goals, and the murder of pilots not in harmony with our programme."