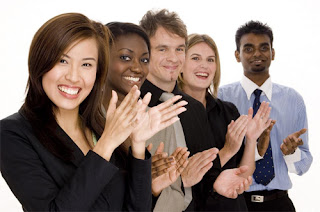 "A gaming universe as vast and unique as EVE Online is constantly evolving and the experience is different for every participant. Conventional games review techniques cannot possibly hope to provide an accurate measure of every aspect of EVE's gameplay. However, with a community initiative like the Blog Banters, we have the resources to deliver the most thorough and up-to-date review ever.

By combining the experiences of contributors from across the EVE metasphere, we get a wealth of opinions from veterans and rookies alike. We'll be able to combine input from faction warfare specialists, wormhole residents, null-sec warriors, missioners, pirates, industrialists, roleplayers, politicians and more to paint a complete picture of the health and progress of EVE Online in its current Retribution incarnation.

Who better to review EVE Online than those who know it best?"

Those people in the picture ain't crazy, they are just insanely happy about Eve Online: Retribution. And those other recent expansions that didn't have the name Incarna attached to them! Eve Online is without a doubt 1000% better than it was before.

Oh sure, I know what you are thinking. But Rixx, what about... (insert your own self-centered pet peeve here!)  And I know that Null has its problems, that Tech Moon Mining is whatever it is, that you think POS Towers need something done to them, and whatever else you think CCP needs to do to improve Eve. And I'm with you. Don't think for a second this whole 'Eve is 1000% better' thing means it is finished. Cause it ain't.

But Eve is never finished. And isn't that just an amazing statement after ten years of development, they are still in development!  How friggin' odd is that?

I wish I could say the same thing about other video games I've enjoyed over the years. But no matter how many times I write the makers of "Shadow of the Colossus" they still haven't updated the graphics or added new content for a really long time. I'm beginning to have doubts they ever will. Which makes me incredibly sad. But CCP? Those nutbags just keep trucking along making Eve better and better each time. And I don't even have to write them annoying letters, they actually listen!

So why is Eve so much better now?

• Ships 350% Better!
The ongoing Tiericide effort has resulted in a more uniform and predictable array of ships to fly in Eve. This has meant that PvP is more widely spread across ship class than it has EVER BEEN. The other day a Merlin defeated my Wolf. That would have been almost impossible before. I'm engaging ships with other ships that wouldn't have stood a chance in previous versions of Eve. You may not think that is important, but it is hugely important. Why?

It means that younger players have options. T1 Cruisers are good at PvP. You can fly more Frigates now than ever before without being embarrassed about it. The Minmatar Rifter is no longer the only choice when it comes to Frigate excellence. I just exploded one yesterday in a stupid Condor! That also would never happen before. And it also means that older players also have options, cheaper options when it comes to choice. The idea that bigger and more expensive automatically means better is, while not completely gone, at least more leveled than before. ( It should never go away, but the gaps being smaller is important.)

• Environment 450% Better!!
You can warp away from Sentry guns and they forget you! Honestly, that should be enough said, but there is more. Sentry guns don't shoot your drones no more. And you can set up your camera to track whatever you click on. People that hate me can put a Bounty on my head and get an email when I explode! Not to mention getting some of their money back. How cool is that!?

Seriously, the entire environment of the game is so much better in so many ways that it is impossible to cover them all. The mere fact that the little number is highlighted when I buy or sell something has made me so happy I could burst! And I don't even use it that much. I can't imagine how happy your traders and industry people must be.

Eve is overall so much easier to play. Less annoying things and more room to engage in actual play.

• Everything 200% Else!
Still work to be done of course. So everything else gets only a 200% better score. ( But notice that adds up to 1000%! See, I didn't just make that up to sell comics! Sorry, old joke.)  I got carried away and added some of the everything else paragraph to the Environment paragraph above didn't I?

OK then, Eve is just generally 200% better than it was when you consider all the other stuff not ship related or environment related.


As my dear readers know I am a Pirate. I live in Low-Security space and I fly around exploding and looting my fellow players ships. That is the sum total of my play-style. My enthusiasm for Eve has never been higher than it is right now. And my optimism towards the future is greater than it has ever been. If this path continues I can only imagine Eve continuing to improve in many, many other ways in the coming months and years. And I haven't always believed that.

As for me, Retribution has fit into my play-style perfectly. I am having my best month EVER in Eve simply because of the changes made in Retribution. So yes, I am proudly biased. In four years of playing Eve I had one month (May 2011) when I killed more than 100 ships in a month. This month I am already approaching 150 and we still have time left. And I haven't played that much, or not any more than I usually do. The simple act of rendering Sentry Guns "fire and forget" has made my own play-style more open. I'm no longer trapped for 15 minutes or more because I engaged someone in system.

And for me, that simple act is worthy of the 1000% better claim.


To read more opinions and entries in the Blog Banter #42 please follow this link.