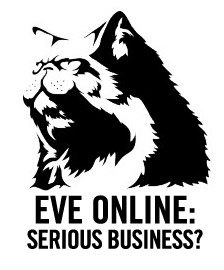 [ Let's try this again. Apologies for posting this earlier and then taking it down. It might not be obvious, but I do have standards around here and the earlier post just didn't cut it. I promise to do better.]

Why? One major reason is that the "srs bzns" idea has done nothing but hurt Eve Online from growing past its initial, and some might argue, dedicated player-base. Already encumbered by "spreadsheet wars" and other negative stereotype monikers, Eve is certainly a complex, time intensive slog fest when it comes to perception of the brand. For the past ten years this overwhelming perception has dominated the description of our beloved game. It is time for it to stop.

Certainly CCP must be aware of this. They've done nothing but try to move away from that foundation for the past two years. Sometimes successfully and sometimes not-so-much. But the current wave of ship balancing, FW changes, Crimewatch and Bounty Systems have been primarily driven by a desire to "open" Eve to the light of something far more powerful than "serious business". One could argue that DUST is also a huge step in this direction as well. And that direction is openness and fun.

And by "fun" I mean accessibility to new audiences. Call it whatever you want, fun, adventure, playability, access, openness, the beginning of this process stems back to the introduction of PLEX and Game Time into Eve. That was the opening bell of a new round of development that stumbles, such as with WiS, and succeeds, as with Retribution. But moving forward it will continue. It has to.

And let's not lie to ourselves here, it is working. Eve is a better game today than it has ever been. And I'm not talking about your favorite pet-peeve, or the problems in Null, or anything else. I'm talking about the Game, with a capital G. Eve looks better, runs better and has more opportunities for play-style options than it has ever had. In small ways and large ways, Eve is the best it has ever been. And there is no reason to think it won't continue in this direction into the near future.

Serious business is not the right perception for Eve any more. I would argue that it isn't even that accurate in describing the current state of our game. While the core concept of "earned potential" within New Eden continues to make the game mean something beyond the pixels ( and that fact is really the heart of why Eve matters so much ) the connection to a level of seriousness beyond the obvious is no longer relevant. Let me try and explain.

When I started playing Eve over four years ago, the options were pretty damn bleak for a new player. Earning ISK and protecting your investment were primary goals because earning it back was a daunting task. Mining, ratting... uh, well that was about it really. Since then we've seen the introduction of Wormholes, Faction Warfare, Plex, GTC, and dozens of other new ways to earn incredible amounts of ISK. ( This isn't an economic post, so we'll ignore the obvious problems ) The point being options are now plentiful and rather gosh darn abundant. ( I'm not bitter about this, lack of funding took me to Null when I was only a week old and I would't trade that experience for anything thank you )

I like the idea of "earned potential" because that is really what Eve is about. I've never used a spreadsheet in my time playing Eve. And I've never once considered Eve anything remotely like a business. I do take it seriously sometimes, but mostly I play for the fun of it. I suspect that most veteran players who start to take the game seriously end up being bitter.

And now the part that tripped me up when I wrote the other version earlier. What does this all mean?

I believe it means we can help. Eve needs to grow up a bit. The "development" phase is over and we need to attract new players to take a spin. Retribution, DUST, these are all going to help us do that, but they can't do it alone. And CCP certainly doesn't have the resources for a massive marketing campaign.  How can we help?

As bloggers, writers, reporters, CSM members, players, readers - Eve Evangelists really - each of us can help in our own way. I can only speak for myself but I plan on dedicating the coming months to promoting Eve the best I can. Writing more young player guides, giving more advice, taking the time to spread the news of just how awesome I think New Eden has become.

I encourage everyone reading this post to consider how you can help. Maybe it is as simple as telling your friends about Eve. Or posting about it on your Facebook page, or starting a new blog, or a thread on your favorite forum, or creating knitted Eve caps - what the heck do I know!!? Do I really need to list all the things you could be doing?! Have a freakin' bake sale or put on a talent show!! For goodness sake start thinking for yourselves.

Sheesh. Eve has already moved beyond serious business, you might just not have noticed.