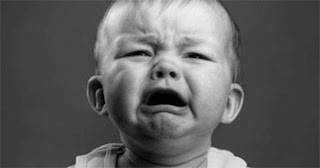 Eve sure is full of Big Babies.

Let's define what I mean. A Big Baby is an immature whiner that believes the world revolves around them and everything that happens to them is "unfair". So, when threatened, they throw fits, tantrums, hurl insults and generally behave so badly that everyone else is drowned out. They'll do this until they get their own way.

That is Big Baby Syndrome, or BBS, and Eve is full of them. You know them, they yell at you on the forums, they attack you in local chat, they lie about you, they whine and whine until everyone else just moves along. They have the biggest mouth, so they always think they must be right.

I tend to attract Babies in Eve. Since day one this has been the case. The very first player I encountered in Eve, way back in Todaki - was a Big Baby. I don't remember the specifics but he exploded outside the Noob station and had a hissy fit in local. Threw a rage tantrum like you wouldn't believe. His character is inactive, I just checked. That was day one.

Since then, like a magnet, Big Babies have been yelling at me, threatening me, accusing me and generally telling me how terrible I am. And how they are going to "make me pay". Lolz. And yes, I can remember each and every one of their names. And yes, I just checked and guess what? Most of them don't play Eve anymore. The rest are heads of Alliances!

I don't think I'm unusual in this regard. I suspect many of you reading this post have your own similar stories about your own encounters with this most pleasing of Eve player. I know for me, I attract them simply because of the way I've always played the game - unapologetic. I play my way and I don't apologize for it. I simply don't care at all what anyone else thinks about it. I'm annoying that way. I rub people the wrong way. I cause trouble, even though I don't try to do so. It just follows me. And I follow it. I admit that.

I used to fly where the trouble was. Name a hot-spot in Eve over the past four years and I was probably there. Or close. That is the way I play. And Big Babies don't like it. It annoys them. They think the world revolves around them and I should recognize how special of a snowflake they are. Awwww, look how cute he is!

You're not a special snowflake. You are meat. And meat exists to be eaten. Don't lie to yourself and think for a minute that I, even for a moment, care what you think. Those that came before you thought that way. And most of them are dust now. Trampled by time. Forgotten by memory. Like you will be.

Harsh? Yeah it is. That is Eve. Deal with it.

I know, I know. Usually this blog is about having "fun", pretty pictures, comics and talking about how awesome this game is. Yeah yeah. But it would be foolish to ignore the other side of Eve. The side full of ignorant Big Babies.

Just remember this dear reader - the BBS biggest weapon against you is how loud they are. Just like real babies they will scream and scream until they get their way. But be strong. Stand your ground. Know that you are right. Play the game the way YOU want to play it and don't let anyone tell you different.

They say Eve doesn't have a win button, but they are wrong. It does. And it is called time. Just hang in there and don't give up.