It is a "Death" Race 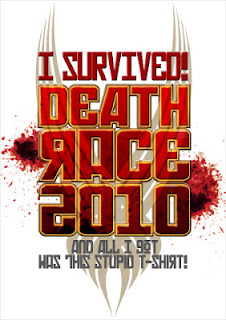 One of the things I love most about the Eve Community is the creativity on display. And I don't just mean "artwork" level creativity, but creative thinking in all aspects of the game - both in and out in real life. From forums, to blogs, to ship fittings and tactics, the Eve player is constantly trying to out-think, out-smart and generally do it all better than his fellow players.

So, rest assured, I know what you're up to. I know your brains are burning trying to think up ways to skirt the rules of the DeathRace and find a way to beat the system, exploit the math, and generally walk away with the prizes without putting in the effort. Believe me, no one would be prouder of you than I would be if you managed to achieve your goal.

But it ain't gonna be easy. Let's review some of the more popular ideas.

Clones.
There are those that believe someone will be able to clone themselves into the finish line system, pop across and win the race.

I mean anything is possible I suppose. If this was a race from point A to point B then that might be a concern. But it isn't. This is a Race from point A to point B to point C to point D to point E. When the race begins pilots will only know about point B and will remain clueless about C, D and E until such time as we tell them about it. So it would be extremely difficult to jump-clone somewhere along the route. And then there is that nasty 24hr timer.

You would also be amazed at just how freakishly fast everything happens. This isn't a gentle romp thru the country-side, this is an insane burn.

High-Security Shortcuts
Somehow, someone will skirt the low-sec race route and take a short-cut thru High-Sec.

See above. But I also admit that this one might actually be possible if it weren't for a few things you don't know about. There is a lot more to this race than meets the eye and we have several surprises in the works. Part of those involve situations for which you will have to be present for in order to qualify for the finish. I can't go into more detail without giving away the store, but trust me, it is called a "Death" Race for a reason.

Gate-Camps
Someone will camp the route and kill us all!

If we start with 200 racers I'd like to end with 10. To me that would be a successful race. It is called a "Death" Race for a reason. But rest assured, we will also have bounty prizes for certain types of ships along the way. I'm working with a sponsor on that specific issue right now.

Remember the route secrecy, that will help with some of this. Unless some evil blogger person leaks certain information to certain parties... but he wouldn't do that now, would he? Muhahahahaha.

There are other ideas out there of course. I welcome them all. Like I said, I appreciate your creativity. And welcome all those that wish to kill us, cheat us, exploit us and otherwise make this event truly an Eve style event. I wouldn't have it any other way!

Trust me. As I write this the prize pool is up to about 5b ISK, give or take. I'd like to see that grow to about 10b or so, not to mention prizes, bounties, etc.