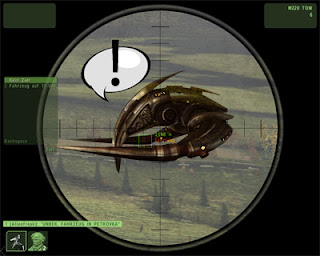 The process of finding a target, acquiring that target and determining ( often in milli-seconds ) if you should engage or withdraw.

Hunting and finding are things I've talked about many times on this blog and they come down to mastering a series of mechanical actions. D-scan being primary among them. It is the third step that is the hardest part of Eve - should I, or shouldn't I?

Engage or not? It is an important question that needs answered under pressure, in difficult circumstances and in an ever-changing and fluid environment. But the answer will determine your fate even before the first volley is fired. The up-coming battle is often won or lost according to the answer your monkey brain decides to pursue. Unlike the other two steps of target acquisition, this one doesn't come down to a mechanical series of checks and balances. It is often clouded by emotion, desire and other human reptile dysfunctions that can lead to bad decision making.

There are different rules when it comes to this decision for Null, Low, WH and High. In this post I'm going to focus on Low-Sec, but many of the traits are the same. I would argue that given the rules in-place that Low-Sec is the most difficult of them all to determine your attack. Especially now with the advent and rise of Faction Warfare variables that didn't even exist a year ago. Add to that background the constantly changing ship balancing, new mods, new tactics and the appearance of cloaks and stabs on ships that never had them before, and the environment is simply insane and impossible to predict.

It is likely that the most common question in Eve comes down to something like this, "Can ship X destroy ship Y?" And this is the heart of what boils down to a 1v1 decision, even in large gangs the fight hinges on a one on one equation. A calculation of available dps, resistance based tanking, speed, location and ability. It may be a simple 1v1 math calculation or a 40v60 one, but it all comes down to that. So yes and no. A Rifter can take down any other ship in the game... depending on certain variables. But it is also highly improbable that it will.

Probability. Given all things being equal a Rifter will always lose to a Dramiel. And yet, Rifters explode Dramiels. How then do we explain such things? All things are, of course, not always equal. In fact they never are. ( This is why, in my opinion, "EFT Warrioring" is a bad thing as it sets up a false sense of "equality" in your mind that simply doesn't exist out in the real world of New Eden )

So how then do we determine an engagement?

We establish a probability of success based upon an inaccurate series of assumptions.

1. You ( whom you hopefully know well ) vs Them ( who you probably don't know at all ) EMP (Equal/Minus/Plus). Let's assume, for the example, you feel this is a PLUS on your side (+)

3. Location - Does he have possible back-up? Is the fight advantage on you or him ( in a belt? or planet, or will you be landing at zero or range?) EMP (-)

4. Character Age - Is the enemy older or younger than you? This is an interesting one. For older characters I actually give less weight than I do to younger characters. The reason is simple, there are only so many skills you can carry in one ship! So being older than me isn't as big of an advantage as it used to be, but being younger than me is more likely a bigger disadvantage than it used to be. This is like a scale you weigh in an instant. And I often just default and consider this one EMP (=)

5. Intangibles. Are you having a bad day already or have you been awesome? Have fights been going your way or not lately? I know this might sound weird but I fully believe there is truth to the fact that Eve works this way. Are the hairs standing up on the back of your neck? Or do you feel like a Super Hero? Confident? Or worried. This one is totally based on nothing, but it is possibly the most important. EMP (-) For this example let's figure I've been having a bad day.

So. (+) (=) (-) (=) (-) adds up to you probably shouldn't attack this ship, you will most likely lose.  If you are already starting to notice the fact that this formula doesn't make any sense at all, then you are starting to understand the problem. There is no answer.

Can a Rifter kill a Megathron? Yes. Sometimes. But usually not. The truth lies somewhere in there because of factors that change constantly. How good is the Rifter? How is it fit? How good is the Mega, how is it fit? We can make assumptions and assign probability, but one thing Eve will teach you rather quickly is your assumptions are a pile of poo. That Mega doesn't even have any fittings! Oh wait, it actually has two friggin' webs!! And a gazillion Warrior IIs!!

Anyone selling you answers with concrete solutions is full of shit.

Nothing substitutes experience. There are no quick paths to enlightenment. The determining factors of engagement are totally up to you. How daring are you? How risk-adverse are you willing to be? Does failure frighten you or challenge you? Are you willing to take risks in order to solo a Megathron, or not? ( That's just an example btw, but I know people who have killed Mega's with Rifters. And even more unlikely engagements.)

There are basic facts upon which to build assumptions however. Ship knowledge being the most important. Understanding how ships are fitted, what their bonuses are and aren't, trends, and probabilities. Upon that knowledge, experience and understanding the odds begin to slide in your favor. Be smart. Fight daring.