Why I don't ransom 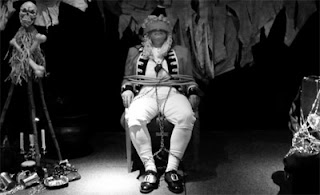 I'm not against the act of ransoming, but I don't participate in the practice myself. If I'm in a gang and others feel they want to do it, I don't stop them. But, when left to my own devices, I simply don't do it.

It is a complicated and yet extremely simple answer. The most important element of which, I don't want to be bothered. Bothered? What does that mean Rixx? Ain't you a scum sucking Pirate?!

Well yes, in game. But I'm a really nice guy out here in the real world. I'm the father of four boys, a professional, a charitable minded responsible adult whose entire career is fundamentally built upon the ability to empathize with others. ( Which is, believe it or not, what great advertising actually is at heart. ) This translates in-game to a guy that spends time talking to people, helping people, and generally feeling sorry about having to explode their ships. I spend a lot of time helping people, as much as I can, get better at fighting people like me. I often will even give them some isk to help them along the way. I know, that isn't very much like a pirate.

But this is all "after the fact". Ransoming is a messy act that is "during the fact". And talking to someone means hearing their tales of whoa, sob stories, pitiful songs and pleading cries for mercy. And outright lies about the value of their pods and heads. Which frankly complicates my hunter/prey relationship with them. Afterwards? Sure, we can talk. But during? No thanks.

And then we add in the time wasted. Not to mention the time hanging around talking when I could be hunting someone else, or heaven forbid attacked by someone else! ( which has happened many times. ) Hanging around a pointed pod having conversations about this and that is no place for a hunter in my opinion. I am vulnerable and I don't like being vulnerable.

I am an impartial killer. I kill everyone. Without bias and without remorse. I am cold-blooded in that regard and I freely admit it. But engaging my potential victim in conversation engages me in their "story" and makes my relationship one based on more than simple hunter/prey. And then to reject their story and pod them anyway? Based solely on isk?

I appreciate those that do ransom. I have nothing against the act. I just don't do it.

Does this make me less than a true Pirate? Perhaps. Historically speaking it certainly doesn't. The brief period in which Pirates plied the seven seas proved that a multitude of so-called Pirates existed, each with their own sense of right and wrong. Of rules and rule breakers. Of codes and honor. Or cold-blooded murder. So being a "pirate" in my opinion can consist of many things.

If not participating in ransoming makes me less than a true Pirate then so be it. I'm not going to change. I earn my kills the hard way. And I earn my loot and my rewards without engaging my enemy while he is held helpless in my sights. If I point your pod, you can rest assured you will be sent home.

That's just the way I play the game. And I expect the same in return. ( Although, if you have my pod pointed, I am willing to talk... )