A Manifesto in Onyx 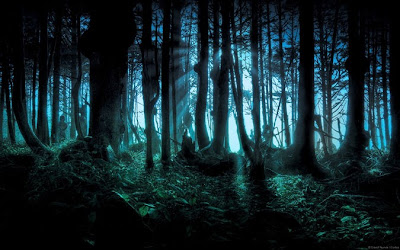 It is almost impossible for us to imagine. True, soul-damning darkness and isolation. But deep down in our marrow is the racial memory of millions of years of our scared, frightened ancestors huddled around the campfire. Not ten feet away a wall of impenetrable darkness beyond which... well, who knew? What was that sound? Why did the Moon disappear and re-appear like that? What exactly happened to Uncle Carl that time he wandered off into the darkness and never came back?

I often imagine my own distant ancestor huddled there at the edge of the light. He'd be as scared as everyone else of course, he was a participant in his own time - just as we are. But he'd also be thinking. And he'd be growing increasingly tired of the stupid, ignorant questions from his fellow sub-humans. I imagine that one night he'd finally snap. And in his rage he would invent an entire history of ignorant - but very creative - answers to those questions. Answers which would eventually give rise to witches, demons, angels and monsters. Such creativity would give birth to religion of course and one day science. But someone had to KNOW, didn't they? If only to quell the fear, the fear that unchecked, might doom us all.

Apologies for my ancestor. I never met him. But he was a good story teller.

The campfire provided warmth, light, and a small measure of safety. And far away, in the distance, other campfires burned. But that gap between them must have seemed as big as the entire universe to those early savages. And to those that followed them. It is incredible when we consider just how long mankind spent huddled in that environment. It was only a blink of an eye ago when we tamed that wall of blackness. But, we are fooling ourselves, that wall isn't truly gone. It is still there. Hiding in the corner, under your bed, in the curtains, waiting for you. Waiting for all of us.

This is how I imagine my home in Eve. The darkness between campfires. The birthplace of the unknown, the shadow of chaos. The place where Uncle Carl wandered off one night and never returned.

I'm headed off on a family vacation for the next nine days. I'm not sure if, or when, I might be writing again until I get back. So pardon my prose, I have some things I want to share before I go.

Low Sec is my home in New Eden.

I treasure it in ways that are difficult to define. Or explain. It is a treasure trove, a constant source from which I pull each day to write this journal. The people are colorful, charismatic, driven, egotistical, insane, creative, tactical, genius, cowardly, frightened, tempted, and among the very best people you will find in-game or out. I love them all. But especially those in Stay Frosty of course.

I am rather passionate about it. I freely and openly admit it, I am biased about it. 100%. And I want it to be great. Greater. Better. Somehow. But, maybe not.

After a decade of development I think we've finally come to the place when the old ways will no longer work. When Big Ideas are truly needed. Fresh thinking and ( i hate myself for saying it ) outside-the-box concepts. The Poo-Poo'ers are out in force, the way-things-are crowd, the that's-the-way-we-doers are strong and they want things to be this way... forever. But nothing is ever this way forever. Everything changes, grows and eventually dies. And then something else will grow.

Something fresh and new.

I do know this. And this is true to ALL of Eve and not just Low Sec. If we tie our hands by what has come before, if we allow ourselves to be constrained by the complacent, by the way things are crowd, we will lose it all. Eve will wither and die. It is as unstoppable as the tide.

Over the last week I've tried to poke a stick at Low Sec. Stir the pot. And I've been watching the bees swarming. Lots of my fellow bloggers have taken up the thread and given us even more to chew on. There are many good, solid ideas out there. As always I encourage even more. Keep reaching, thinking and exploring.

I think that is the fundamental question. Certainly it needs the usual amount of tweaks, nerfs and buffs, but does it need more? Or will it cease to be low sec if we tamper too much?

Deep down in the marrow of my bones I feel the darkness. And I want nothing more than to take a Mega Pulse Laser and mow darkness down to the pod!

I leave you no better then. And for that my sincere apologies.

Like my ancestor before me, I am the story-teller. And I will keep spinning yarns until the sun comes up and everyone else has to go to work feeding us. I don't have to work the fields of course, because the Great Serpent Benjamin has selected me as his Holy Priest y'know.

See you all on the other side of a week.