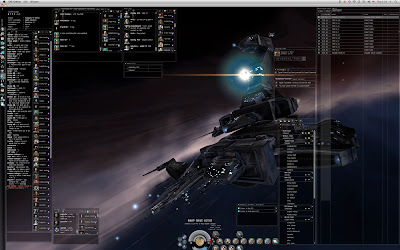 I realize I've been cruising down memory lane a bit this week, can't explain it, it is what it is.

This screen shot was taken on June 11th, 2009 in 7MD-S1 in Providence, a fleet of 67 apparently. And yes, I remember exactly why I took this screen shot.

We used to have this FC, I won't mention his name, who had the nasty habit of warping us to zero just as the bad guys were jumping. This happened a lot. So much so that eventually the higher-ups removed his "approved FC" standing and saved us all from further derps.

Almost immediately after this picture was taken, my Scorpion died at one such gate. Scorpions being primary and whatnot. This was the last Scorpion I flew for a very long time afterwards. Heck, I wasn't skilled enough to be flying it then! What was I thinking?

I have flown them since, but not in the last two years. Moving to Low Sec changed my opinion about ECM a tiny bit.

I do love the new Scorpion model though and I have an un-fitted one sitting in my hanger. I might just fit it up again to use for very specific types of fleets, or as a rescue ship. What is a "rescue ship" you might ask? Well, sometimes my corp mates get into trouble they shouldn't and need to be rescued. lol.

Funny I just finished training Cruise Missile V after all these years. I don't even own any T2 launchers or ammo!

And so it goes.