My Week with the Wittle White Ship 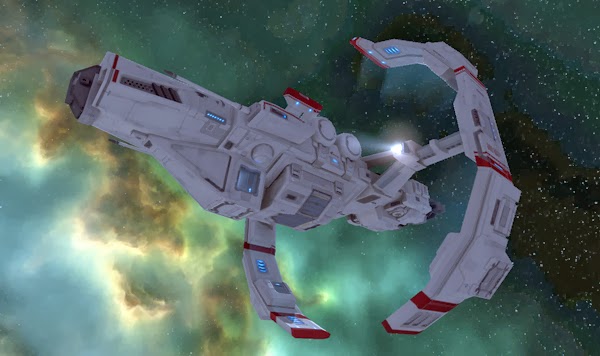 As I reported earlier this week, my good friend and fellow Corp mate Akirra Menelaos was nice enough to sell me one of the very first Astero Frigates off the assembly line early Tuesday. I immediately fell in love with the little Frigate and started working on a fit from scratch.

Considering the bonuses and the configuration of the ship, I was convinced it could be the perfect Anti-Plexer Ship. And that is the purpose I started fitting it for. I know other people are using it for other things, but that is the purpose I see for it. I tweaked the fit constantly during the week, as usual aiming for both effective use and cheapness. The goal, I believe, of any true pirate.

I essentially started with Cloak/Nuet in the highs, Dual-Scram, Web, AB in the mids, and then Plate, Adaptive, Drone, DC in the lows. Initially at least, that was the starting pattern. A dual Web fit wouldn't catch stabbed plexers, in fact I missed my first kill of a Venture with a dual Web fit. Which is why I switched to dual-scram instead.

Catalyst
I landed back at station after the Venture miss and changed the fit up a little, removed the extra Web and went dual-scram. Undocked and saw this Catalyst and his buddy in the Navitas on scan. Perfect targets to prove the concept. Landed close enough to the Cat to get points and the Navitas stayed to provide reps. It was a lot closer than I would like, I considered breaking off a few times, but the Cat finally went down. The Navitas warped off before I could get point. The ship proved how tough it was.

Comet
Another few tweaks and another chance to prove the concept. This time I showed myself long enough to get attention and then cloaked up and waited. Sure enough, he landed near me and I boated over to de-cloak and get points. I had some back-up on this one and I already detailed this kill in my last post.

Incursus
The first dual stabbed Plexer. The Plexer doesn't get much warning with this ship, which is a big part of the idea of course. The only time they see me on scan is when I am already jumping into the plex. The dual scram worked its charms and he went down relatively easily.

Megathron
I detailed this engagement in the last post, but suffice to say the little ship managed to hold tackle on the Mega and survive the de-cloaking Pilgrim long enough for the gang to arrive. Yet another successful proof of concept.

Punisher
The first straight up 1v1 against a good PvP pilot who knew ahead of time what I was flying. We went to the Sun and had at it and the Astero came out on top. Good fight and it was close. Nice to know it can hang with the traditional frigates. Confidence is growing.

Comet
This one was pure concept realized. The Comet was cloaking up as usual, so I warped in and flew around a bit, then aligned out as if to warp off - but instead cloaked up! And then waited a few minutes and sure enough, it de-cloaks about 37k from me. I boat over and the rest is history.

Tristan
Bad Tristan fit, but yet another plexer caught and taught.

Hookbill
Another perfect example of the concept at work, this time the sudden appearance of my ship was enough to grab the points needed to hold him down. Good fight.


Everytime you undock your ship it is already dead, so eventually all good things must end. We set a trap for two Kestrels that were using Legion links. I was orbiting the beacon and Sea was cloaked off of me in his Pilgrim. They landed and they hit very, very hard. We did manage to get one of the Kestrels, but I did lose the Astero.

Like any ship in Eve, it has its limitations and advantages. I'm still convinced it is a great Anti-Plexer ship and given the current environment of running and cloaking, a ship we needed to help balance the field.

Got another one on order.