NEWS FLASH: Turns out Jita is a LIE! 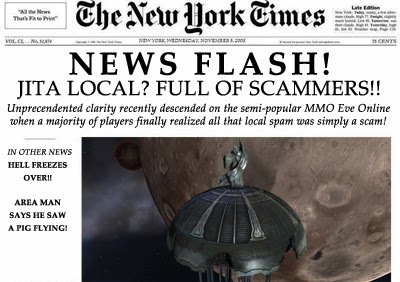 Third Rule of Eve
Pay No Attention to Jita Local

I've never been scammed. And I've never scammed anyone. When I started playing my Corp mates told me to never trust anyone, hold onto my API like it was my first born baby, and generally never click on a link you didn't ask for, or talk in local. I haven't always made the right decisions, and I've trusted people I probably shouldn't have from time to time, but I've never been scammed.

I cringe when I rarely make the trip to Jita. I do not like that place and I've said so many, many times here on this blog. Ugh. It is not at all the kind of Eve that I play on a daily basis and I think it is a blight. But it is the reality and from time to time I have to go there for ebil supplies. I never talk in local or click anything, in general I avoid even looking at local.

Until a few days ago I had never heard the name Erotica1. I wish I still hadn't. I don't pay attention to assholes. I fully support everyone's right to play Eve the way they want to play Eve, and trust in CCP to ban those that cross the line. Over the years I've done my part to help that process along by reporting those that I believe have crossed the line. And I'm proud of the fact that some of those reports have resulted in bans. It is the least I can do as a human being. I personally find many people annoying, rotten, and otherwise juvenile in Eve. I avoid those people. I once quit an Alliance after two days because every single time anyone came onto Comms they would yell an anti-gay insult at the top of their lungs. I'm not gay. But I am a human being.

While I have never been scammed, I have been the victim of other types of aggression in Eve. There are people I have encountered along the way that have made things personal and gone out of their way to try and ruin my game. I won't replay the litany, but even now there are those that specifically target me in-game. Again, no big deal, as long as it doesn't cross the line. I can often give as well as receive.

Jita is a Lie people. No one is quitting the game and leaving you any isk. No one can take your investment and double it, or triple it, or anything else. If it sounds too good to be true? Guess what? It is. There are no short cuts. Guard your API and only give it to those who have more to lose than you do, like an established Corp or Alliance API Verification program. And then only give them the minimum they need to verify you are a real player. Trust no one unless you know them, they have more to lose than you do, and you have independent verification of their bona fides.

Like me. I can't afford to be a scammer. I have way to much to lose. I've spent years of investment in this game and I wouldn't do anything to put that at risk. You can trust people in Eve, you just have to know who to trust.

I'm not getting in the middle of this argument because I think there is no middle. Players that hurt other players within Eve should be dealt with. CCP has always seemed to have a pretty decent handle on this issue. Players should be smarter, better educated consumers. Goodness knows there are so many more assets available now than when I started playing. But CCP cannot police the world outside of Eve anymore than I can.

Be smart. Let's drive scammers out of business by our intelligence, our cunning, and by sharing what we've learned with other players. My corp mates took the time when I was a Noob to explain things to me. We can all do the same.


PS: The API example comes from my own experience and reflects the situation in Eve from over five years ago. CCP has done an amazing job of fixing the API situation since then, making it customizable and flexible. Just an FYI.