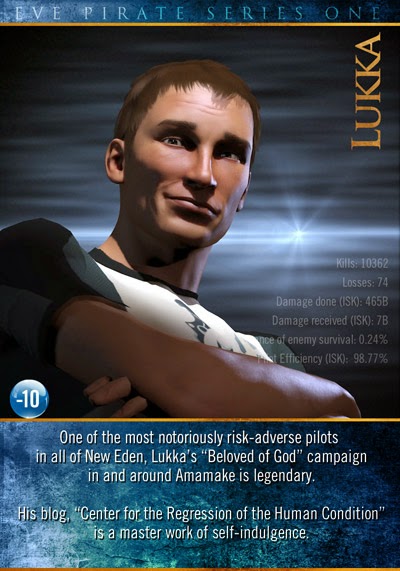 Over the past two weeks my little side project has turned into a rather remarkable and ever-expanding walk thru Eve's rather dark and nefarious side. Now with 43 cards in the collection, it is starting to feel potentially never ending.

And it could be. I could quite literally make cards until the cows come home - which would be a long ass time, since I do not have any cows. Not to mention weird.

And I sincerely appreciate all of the offers for ISK, or the guys that want to print them for real, and all the other contacts. Why haven't you made a card with me on it yet, is a common refrain. (I can assure my readers that NO ONE has paid ISK to be on a card, nor will I accept payment for this project.)

So I thought maybe it was time to expand on the selection process and try to explain why I will not be making 500,000 cards featuring every player in New Eden. We have a memorial for that in Iceland.

I am genuinely trying my best to keep the set balanced. For example, currently there are only 3 cards featuring my own Stay Frosty pilots. I could easily have picked more of them. (And more are coming eventually) There are members of Tuskers, Black Rebels, Shadow, Bastards, and countless other corporations that are also deserving of a card. In many cases, entire Corporations that deserve a card. Providing that kind of coverage would greatly expand and dilute the entire point of the set.

Add to the above challenge the additional goal of also providing a glimpse into the history of Eve, players that left their mark on the history of piracy in New Eden. This is for me, and I expect others as well, a learning experience. While I have heard many of the names before, I may not have really appreciated the accomplishments of some players as fully as I do now. This is also a factor that I'm trying to balance into the set as I go along.

This is a Pirate-centric card set. There will not be a High-Sec or a Wormhole or a Null set, sorry. Some of those people will make it into the set possibly, just as Chribba or Sindel have already. But I'm interested in Pirates, I am a Pirate and already some of these cards take a significant amount of research and digging on my part. I can only imagine if I was focusing on a play-style I know very little about. That would be insane.

I am also trying to be extremely fair. There are characters already on these cards that I do not personally like very much. But they are there anyway. This is a personal project, so some of my own personal feelings do tend to leak into the cards. This is also on purpose and I believe adds to the fun of the sets.

I do plan on a series of Pirate Corporation Cards. I do plan on several other "special" editions, like the Ally Cards or the Pirate Alert Cards. These help to round out the set in my opinion. And eventually each Pirate Faction ship will most likely get their own card.

Ultimately however, the final determination of who gets their own card has to lie with me. Everyone won't have one. That is nothing personal. I still like you, respect you and enjoy flying with and against you. But I seriously cannot make a card for everyone. This is not a life's work. It is a few minutes in the morning.

I do hope you are enjoying the set. Series One closes at card #52 and then Series Two begins. I believe we will have three series, but I'm not 100% settled on that yet.

We have a long way to go yet.