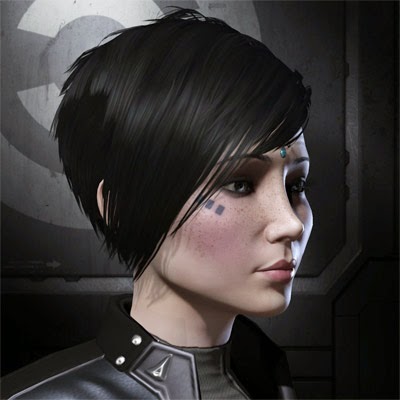 This post features Alice Vorpalis a proud member of Lucifer's Hammer, and alt character of a Stay Frosty pilot.


• Tell us a little about your background in Eve or in this case, how I started to play Eve

I have known for some time that there existed a spaceship game named Eve, there was a TV commercial some years ago. But at that point it was just some mmo with a monthly fee and thus I did not give it a second thought. That was a few years ago.

In the late summer of 2013 a friend of mine had read an article about the link between Dust and Eve. We had never heard of such a connection between games before and I, slowly getting tired of Planetside 2 at that time, got courious, so I registered on a trial account with Harpye and started to play, and read about how this immense universe is working.

Two weeks later I was so excited about the game that I subscribed for half a year. After I had finished the tutorials and the sisters of eve arc I started to trade in Amarr and station trading is my main source of income ever since.


• How did you first hear about SF, LH, MATH

When Harpye, my first character, was six weeks old, I decided to give piracy a try. Since loosing all highsec access was not an option I created ChingShi Bonney, in memory of the two greatest female pirates history has seen. ChingShi got her own one-man corp, the "Red Flag Raiders" and started to move to lowsec. It was a funny time, sometimes frustrating, nearly no kills and lots of lost Punishers. But lowsec is a cool place and I got to know Karos M'al, a pirate who taught me some basics of pvp. While roaming solo through FW space I met Alexis DeTocqueville who suggested I should join Stay Frosty if I wanted to continue being a pirate.

And that is what I did after some days of consideration and moving my HQ. I only miss my red and black Jolly Roger from The Red Flag Raiders sometimes!

As hauling my goods to Hevrice was always a risk for my neutral trader character Harpye and later Alice, I joined Lucifer's Hammer only to be safe from my fellow pirates, before the corp started to expand.

Alice and Harpye were slowly becoming decent station traders in Amarr and Jita, and I also spent some time trading in Dodixie, but went back to the big hubs after a few weeks.

The central idea of the -ABA- family is to have fun as a team and still be able to do more or less what you want as a single player. That suits me perfectly as I enjoy the lonesome hauls as much as the roams in a small band. At the moment I am focusing on trade and industry in LH and there is no pressure to be online with my SF character.

The evil pirates are often very friendly and supportive players. Being a pirate is very funny but also difficult if one wants to win fights and not just have the good fights. I learned that the New Eden cluster is a large and complex place, almost like a real city with 50000 citizens - and I want to explore that place. Being in a corporation and now an alliance is really an enhancement to the whole gameplay. And that Eve is a game for all kinds of gamers, the fighters, the builders and traders etc.

Yes: Get enough ISK to buy a stack of T1 frigates and mods, get them over to Hevrice (EDITOR: Or Ishomilken!) and start undocking. Expect to lose those frigates, fly with the more experienced players and ask them how to get better. Have a little patience, it will take time to become a good PVPer, the competition is harsh, but it's a good place to learn and support is just around the corner.

Actually, my goal was to make enough passive ISK income in LH to spend my time with ChingShi being the bad pirate.

But right now I spend most of my time with Alice trading and starting some manufacturing and a few services for the corp and alliance. This started because I thought I needed to expand my trading volume to generate enough ISK for ChingShi, especially for the larger ships later on. But then I realized I do enjoy the trading and hauling and now also a little industry as well, so my goals changed.

Piracy has become a secondary goal and building a solid trader, hauler and manufacturer is my main occupation at the moment.

Like Kaytee I want to help building an industrial network of miners, PI-ers (whatever) manufacturers, haulers, traders etc. to support and supply ST-FR and MATH.


• Do you have a funny Eve story you could share?

I was in the last big CCP event and died gloriously to some nullsec gatecamp after more than an hour of crawling with hundreds of other pilots through time dilated space. That was very funny.

Oh, and then there was that war with the Marmite Collective I started accidentally by smack talking in Amarr... Oups!

Oh well, he's just that guy, you know?
(EDITOR: This is so true. Even though he doesn't have two heads.)


More to come. If you are interested in a career with A Band Apart and our family of Corporations, please join the EVEOGANDA and/or The Frosty Hammer channels in-game to learn more.