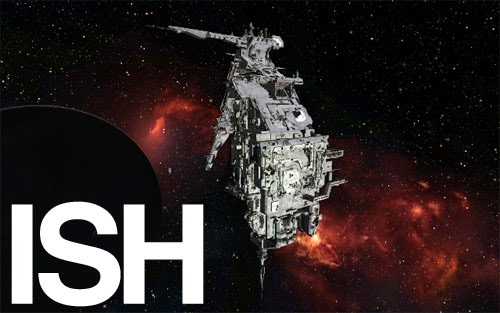 Yes. I did just take a few days off from my usual rapid-fire, awesome, daily uber-posting schedule. Four days to be precise. Everyone, even your friendly neighborhood blogger, needs a break from time to time.

I was crazy busy leading up to the Holiday weekend. It took about two weeks to get everything organized and moved to our new HQ in Ishomilken. Which cut into my fun-time considerably. (My play is divided into two parts: Fun and Work. I try to minimize the work as much as possible!)

But 12 Freighter round trips and 6 Carrier round-trips fall into the work side of Eve. Something that has to be done, even if I don't like it very much. (Don't tell anyone, but I really don't mind. I'm writing this mostly as posturing to maintain my steely eyed Pirate persona. Shhh.)

So I've been somewhat settled into Ishomilken for a little over a week at this point. So what do we think about our new home? To be honest, there is so much to like about this area that it boggles the mind. I know those of us who tried to plan our move spent some considerable time and effort pouring over the map, scouting and generally trying our best to find a decent place to move. But you never really know for sure until you get there. And while I've flown all over New Eden, the fact that I spent much of the past three years in and around Verge Vendor might have something to do with the fact that Ishomilken feels like a much needed breath of fresh air.

It is so perfect that our base station undock is almost a perfect straight-shot to the High Sec gate. I kid you not.

It is a nutty place. Busier than Hevrice was, but in so many different ways. In fact, the variety of scale is rather significantly different. Verge had become a rather predictable and regular place, a collection of small to medium plexers hunted by bands of solo and small gangers, inhabited by large groups, and sometimes passed thru by larger entities. Meanwhile, this borderland region between The Citadel and Black Rise, seems much more chaotic and less regulated. A constant stream of insanity bordering on chaos.

I think we did rather well finding a new home. Stay Frosty seems to fit in rather nicely here among the chaos. (We still haven't gotten around to gate camping, my apologies to certain other parties that seemed determined to believe that is why we moved.)

I've also noticed that the Faction types up this way are much more prone to risk-aversion than those in VV. They tend to run away more often, or otherwise fit more stabs, cloaks, or hide when danger comes along. I've seen gangs of six or more run away from my solo ship, or a small gang. Last night a group of about 14 ran away from my Maller, even though they had me in half-armor. But this is tempered by the fact that there are many, many more hunters than prey. At least this is how it seems after a few weeks. This is good news, as it provides just the right amount of challenge to keep things interesting. Believe it or not, no one enjoys having to prey on faction targets in plex all day. That gets rather boring rather quickly.

All in all my first impressions of our new home are all positive. Everyone seems energized and excited by the move, which is exactly why we did it. To shake things up, to meet new people, to challenge ourselves and get on with becoming an even better group of fun-loving pirate types.