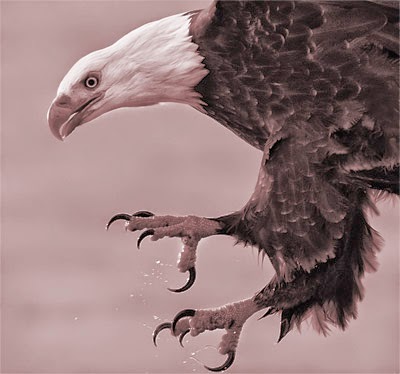 The Lotka–Volterra equations, also known as the predator–prey equations, are a pair of first-order, non-linear, differential equations frequently used to describe the dynamics of biological systems in which two species interact, one as a predator and the other as prey.

I won't bore you with MATH, you can go check that out on your own time. (It is rather fascinating.) But I do find the mathematical relationship between predator and prey extremely interesting. Especially in light of Eve Online.

Let's take a look at some basic assumptions in regards to that relationship:

• The prey population finds ample food at all times.

• The food supply of the predator population depends entirely on the size of the prey population.

• The rate of change of population is proportional to its size.

• During the process, the environment does not change in favor of one species.

Using this basic relationship equation it is possible to predict the general outcome of any environment in relation to each species. In other words, you can see how this will all end up. Too many predators isn't good, and too many prey is also not good. Balance being the key in all things.

As CEO of an Apex Predator Pack in Eve Online, I am keenly aware of the challenges inherent in that relationship. Managing 200+ hungry mouths is not an easy task, for it to work we need prey. Lots of them. Otherwise we start to lose Predators and the Pack starts to shrink. In order for the Pack to grow and prosper, we need more prey. It is a rather simple and balanced relationship.

There are ways, within this system, to keep the Predator Pack happy and thriving. Let's take a look at some of them:

1) Respect your Prey. This might seem counter-intuitive, but trust me it isn't. Showing mercy, or respect, to your targets encourages them to continue in their chosen field. It also encourages them to spread the word about how awesome of an Eagle you are and how others should also respect you in return. (In nature, Predators tend to target the weak and sick, this is their way of respecting prey. By allowing the strong to live and breed.)

2) Increased Territory. Range is vital. In nature a single Apex Predator can rule over territory the size of a small country. In Eve it is critical to spread out and hunt in new areas from time to time. Bunching up in one spot depletes the amount of prey available to the Pack. Prey tend to talk amongst each other and the word will spread about how dangerous your cave is.

3) Distractions. The Pack loves a good party. Make sure to keep the beer stocked and throw lots of Events, Tournaments, activities, and other distractions at them. This keeps the Pack hungry for more.

4) Shake Things Up. From time to time it helps to change a few dynamics, to keep your Pack on their toes. Keep the edge honed, etc. Predators cannot get lazy. When they do, they tend to become Prey themselves. And that is just sad for everyone.

The dynamic between Predator and Prey in Eve, especially in Low-Sec, is a constantly changing, evolving, and adaptive balance. Herds tend to migrate, other Predators move into your territory, Fozzie changes something, or you've managed to over-hunt a certain area. Prey do not enjoy being caught. They are a crafty bunch and will use lots of cunning to avoid being kilt. This is important to remember, only a smart and crafty Predator will survive. One that is smarter and more cunning than his Prey. That is the inherent challenge of Predators everywhere. In nature and in Eve Online.

This dynamic often leads to "Creep", and that is something we'll discuss in tomorrow's post. Until then.