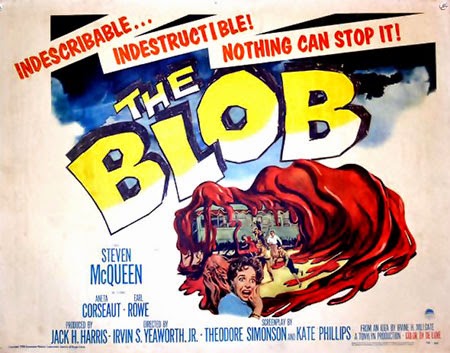 Poor Blob. Such a horrible word that has so often been attached to really horrible ideas. A truly slow moving horror, a truly fat super-villain, cartoon bad-guys, and a long list of equally disturbing images. The Blob is a shapeless, amoral conglomerate of snot, typically up to no good.

All of which it deserves. Lets be honest here, no one stands for The Blob. It is deservedly un-loved, reviled, and considered a bad thing to be avoided. Blob is no fun. Blob is bad. Blob needs to be shunned.

Blob is hard to define, but like most things that are hard to define - we know it when we see it. I don't know what that, that thing in the alleyway is exactly - but I'm pretty goddamn sure its a Blob! Blobs wash up on a beach and we poke it with sticks, no one is gonna touch the darn thing with their hands!! That is just how vile the prospect of a Blob is, we can't even bring ourselves to touch it.

In Eve a Blob is also considered a bad thing. Generally it is perceived as any un-equal application of force that is not associated with a Gate or Station. Because those are called Gate and/or Station Camps. Camps are different than Blobs, camps are fun times with your friends out in the woods. Living in tents, getting infested with Chiggers, and usually developing some kind of annoying rash. Camps are camps. Blobs are not camps. Blobs eat camps for breakfast.

I do not like confusion, so let me try to bring some rational thought to this discussion. First of all, it is extremely important to realize that the classification of anything as a "Blob" always comes from the loser of an engagement. The winners rarely consider what just happened as a "Blob". To a fault, the accusation and classification comes directly from someone that just lost his ship. They are excited, angry, pissed-off, disappointed in themselves (Mom always said they'd never amount to anything!) and frankly, can't be trusted to make accurate statements at that time. So whatever they say has to be taken with a grain of salt.

Let's try to define a Blob. "A Blob is any application of force which contains elements not necessary to the positive outcome of said application." In other words, three Frigates can be relatively sure of winning a fight against a Dramiel, but not assured of winning such a fight. The addition of a Sentinel or a Falcon to that fight assures the Frigates of victory. And such application makes such an attack a Blob. So a Blob becomes any accumulation of force needed to assure victory in an engagement. The victim of a Blob cannot be expected to win. He has to have no chance of winning. Zero chance = Blob.

I avoid all of this by simply never accusing anyone of blobbing me. I get caught with my pants down, so be it. That is on me. I should be a better pilot, smarter than my enemy, more crafty, and better prepared to avoid being slaughtered. I also realize that the "blob" that killed me might have been out looking for bigger prey, in which case they would not be considered a Blob. Only to me, of course. I also know that I will often have ten or so pilots along with me and we attack everything we come across, which can also sometimes be considered a blob. Even though we aren't doing that on purpose.

On purpose. And here it comes, the truth of the matter. While Blobs are situational and rely on a loser's perception, there are times when such a creature is deliberate and purposeful. When there can be no doubt associated with its application. There are those that construct a Blob solely for the intention of assuring victory in a single application of force. Such an assemblage being constructed for one purpose and one purpose only - to avoid risk.

And that my friends is when a spade becomes a spade. That is when you become an amorphous pile of snot, when you purposefully avoid risk by becoming a Blob. Only you might know this about yourself, and that is fine. Because only you have to live with that knowledge.

Character is what you are in the dark.

Bounty Hunting in Eve Online is something that has been a dream for literal decades. The current bounty system sucks wiener dog butt and is goofy, stupid, and other words that mean terrible. So what do? How about a system that not only promotes real bounty hunting, but also magically improves an area of space that desperately needs improved? What if we could make Low Security space more like the wild west it is supposed to be? Would that be something you'd be interested in? I know I would. The beauty of this idea is just how freaking simple it is. Follow along now. A Two-Sided Scale Bad people live in Low Sec. It is a lawless region of space known for Pirates, Hot-Drops, Gate Camps, and other degenerate play choices. These people are scum. I know, I am the worst one. These people not only take insane risks creating content but also have a very difficult time making ends meet. Paying bills. And buying faction mods. They also, insert drum solo, take a heavy hit on the old security

I meant to post this yesterday, but the day got away from me. I think it is important to re-post this video from time to time so that new players get a chance to see it. If you have never watched it you should. I've been a proud supporter, advocate, and often a participant in Broadcast 4 Reps over the years and I fully support the mission of both Spam 4 Heals and B4R in our community. Participating in this video was an important way to help get things started, but the mission continues each and every day. Just yesterday in-game I spoke to someone for 30 minutes in chat and pointed them to the B4R Discord .  As I said last night on Lasers & Lace, you don't have to be a blogger, or an Eve celebrity, to be an advocate for B4R. Simply listen to your fellow players and care about their well being. Especially now, with all that is going on in the world around us, pay attention. And if  they need help, point them towards someone who can help. We can all make a difference and be

Not to be confused with the march in 1964. There are times when Eve is weird, confusing, and frustrating. Even for a 12 year veteran who does nothing but PvP all the time. Such as me. I talk about these frustrations here in these pages a lot because to me they are far more fascinating than the times when everything goes well. Although I much prefer the perfect plan execution, I think it is important to openly discuss our failures. This is how we learn. And it also helps younger players to know it can happen to anyone. Even us well seasoned vets. Nothing went according to plan yesterday. Not a lot of activity in the fields yesterday, so the day started out slow. I managed to catch a Catalyst with my Hookbill  and an empty Griffin shortly afterwards . These weird empty ships are really starting to bother me much more than WCS ever did. You can't use WCS without at least fitting them! Because of the free drugs we get for logging in these days, I had a nice 3% bonus to armor repair on