A History of Numbers 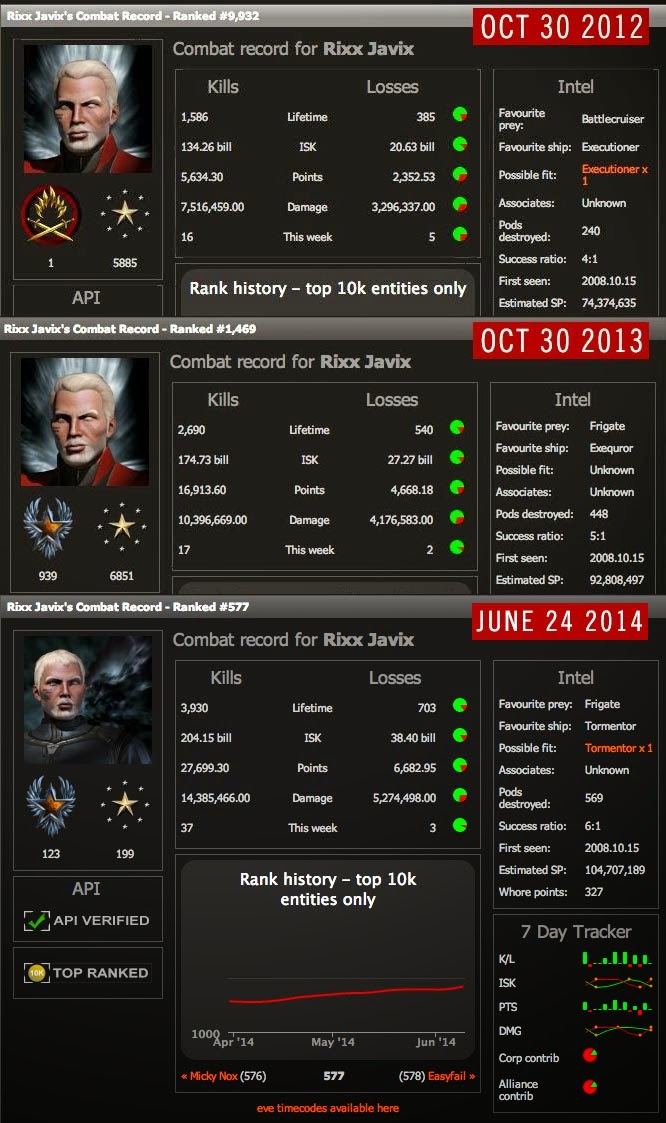 According to this post from June 2010, exactly four years ago now, I was ranked #42,372 on BattleClinic with 526 Kills and 172 Losses. That was one and a half years into my Eve career, primarily in Null Sec up to that point.

I updated it this morning after reading that post from four years ago. Sadly, unemployment has been very good to my Eve career.

For those of you that do not know, for the first four years Eve was a very small part of my life. I had my own business to run and about 40 employees, clients, and all the other headaches of a busy career to deal with. Eve was something I played when I had time, sometimes at lunch, or on the weekends for an hour here, or an hour there. More often than not I would have to drop right in the middle of a battle because of real life. I died a lot because of that.

I started playing Eve because of my Son. We had both just gone through a pretty terrible divorce and Eve was our way of sharing time together. But for those first four years he was the primary driver behind my Eve career. We went where he wanted, did what he wanted to do. That is why I changed corporations so often, why I moved all over the universe. Essentially I just followed him around. He stopped playing Eve right around the Fall of 2012. Since then my Eve career has been all me.

When I think back on all of that now, in hindsight, I can see how those years developed the philosophy that has driven the last two years. How that initial play-style infused the spirit that has become what Stay Frosty represents. None of what has happened in the last two years would have happened if those first four hadn't gone the way they did.

My oldest, the one who I followed around Eve, is getting married in less than a month and joining the Army.

My Eve career is a parchment upon which is written some pretty heavy emotional tracks from the last six years. Divorce, the loss of my business, bankruptcy, new family, new life and the continuing struggles to re-build the pieces into something brand new and much, much better.

I say all of this because Eve is Real. It involves real people with real lives. All of us have our own story to tell, a story that sometimes doesn't have anything to do with Eve at all. And it is this context that truly drives the story of Eve. Family trauma, loss of jobs, death, disease, all the things that drive people away from Eve. Or change their lives forever.

It is, after all, just a game. And that is why I can always confidently say that kill-boards don't really matter. And, at the same time, talk about them. That is the duality of Eve. A game certainly, but one that mirrors our lives. I can point to every single event in my Eve career and tell you the thing that was happening in my life at the time. The time one of my young boys went into the Hospital? That's when I closed Lucifer's Hammer that first time. And on and on.

Yep. I'm seventy kills away from 4,000. Less than many, more than most. It has been a long six years.

Where will the next six take us?