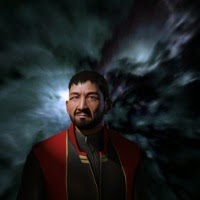 I am extremely proud of the players that fly with the Band. Whoever they are, for how ever long they happen to be with us, and for what each of them bring to the table. I have one forum from which to shout and I will continue to shout from that forum for as long as I can. If you can't stand it, then go somewhere else.

This is the -ABA- series, where any pilot in A Band Apart has the chance to share what they like about Eve and whatever else they'd like to say. Unedited. Free to follow the template or make up their own. Straight from the forums.

Today's pilot is Astral Dominix. You may know him from his own excellent blog over at Astrals Eve Trial By Fire. Astral and I go way back and we started blogging around the same time.

I started playing eve late in 2008, after two trials on different accounts I decided to take the plunge and sub, I quickly became obsessed with the blogs while compulsively researching every area of the game and decided to start my own blog from my second week of playing. In the beginning I spent  time as most do in a mission running corp thinking the kids that ran Level 4's we're cool and the one who did it solo were leet!

Then the corp was infiltrated and basically fell apart as a director lost a command ship to a awoxer (funny looking back) later I found another pve corp about to move to null, it was basically very unorganized but after a few more months we moved to null and I lived in a pos for a few months, hated it, came back to lowsec and joined the black rabbits (a very cool pirate corp at the time) however the head of the alliance had lost his way with the pirate life and wanted to head back to null... That caused a rift in the core group and fla5hy red was formed...after some time there I grew bored and floated between inactivity, fw, exploration and piracy till I found stay frosty, and I have called this my home for almost a year now.

Blogs, I'm obsessive about them and always have been, I followed rixx and evoganda since I started and still do, chances are if you have a blog about eve, I probably read it.

I enjoy being left to do what I feel like, I'm at a point skill point wise and isk wise that I can fly what I want how I want, so all that maters now is fun, and when I log in as a stay frosty pilot I can undock and be in a fun fight or a fun fleet in minutes, because if there isn't something going on, I'll go make some shit happen...I'm like a laxative (true story)

As odd as this May sound, until recently I had no shield skills at all and only flew armour.... Now I shield tank too.

Undock, listen to what other people suggest then do what you feel like, it's a good game so play it your way.

At the moment I'd like to break 100 kills a month, due to work and the wife my time is limited so I only play 1-2 hours a few nights a week

I once flew all the way through lowsec drunk shouting my mouth off in local to try to get a fight while flying a Rifter, I was so hammered I could hardly type but I was being so obnoxious people must have assumed I was bait and wasn't even locked once in 43 systems..also at one point I claimed loes as my system... Told anyone that entered it was mine and actively attacked anyone that stayed more than 5 mins, I can't remember why...

• What is your favorite thing about Rixx?

He shares my loathing of penguins, they are the transvestite of the animal world... March of the penguins, the clue is in the name people!!


You can reach us in-game at the EVEOGANDA or The Frosty Hammer channels.