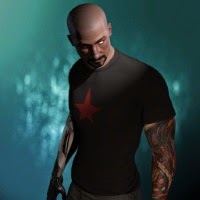 I played that 'other' MMO since vanilla and left when the pvp became more arena than world based. Jumped around a few MMOs until I tried EVE with the promise of meaningful and dynamic PVP. I tried playing solo at first and got bored out of my mind. A second trial later and I went straight to RvB after a forum recommendation. Loved it since. Took the jump from there and went to FW and null sec to find out more about EVE PVP

People are very approachable and helpful. Not at all like pirates! There’s a casual atmosphere and no real pressure to do anything specific. At the same time, there’s a lot of talented pilots who can do amazing things

How important it is to know the difference between high and low sec! Also, set up your damn overview properly :) Most important thing is that you should be having fun

Think long term and have fun. Learning about EVE just means there’s more fun to be had! Take each moment as a chance to learn something new. Don’t fly what you can’t afford to lose and don’t sweat the losses, you can always catch up.

To be the best pvp pilot I can. There is a lot to do in game but for me, it all depends on how good a pilot you are. To promote SF as a place where cool people can have fun and not sacrifice their real life to do it.

I flew all my assets from my starter station into RvB space. When I entered, I was locked by a Rifter. I thought I was going to die so I quit the client. I didn’t log in for few hours after that! When I did, my ship had somehow got away intact!

His attitude to the game and the people that play it. He’s proof that not everyone in EVE wants to destroy you. Oh and hats… lots of hats.
(EDITOR: We still need hats in-game.)


A Band Apart.  What other Alliance in Eve would give its pilots their own platform each week? That is just one of the things that make us unique. Another is our Pirate, Industry, Exploration arms that work together, support each other, and respect each other. Join our in-game channels EVEOGANDA and/or The Frosty Hammer to learn more.