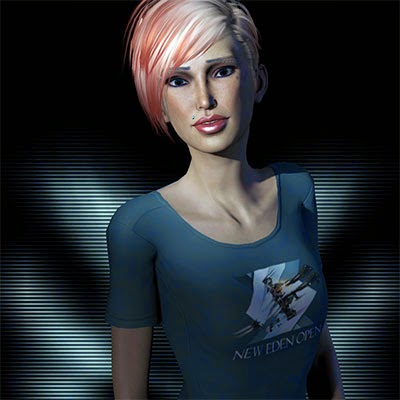 This post features Oma Lorche, one of our Stay Frosty Directors and an awesome player that has become one of the cornerstones of our entire Alliance. I still have the Ashimmu she gave me about a year before I started SF. It is called, "Oma's Gift". And it ain't dead yet.

Tell us about your background in Eve

I started playing in march 2011. I had just bought a new computer and was more about installing games to check how they look like than to actually play. Nothing ever caught my interest enough to start and finish a game. My brother is a much bigger gamer then I ever was. He told me about the Eve videos he saw on youtube. I tried it and finally get hooked. There was always something more to learn more to explore, more to look forward to. I think complexity and the higher learning curve made it fun for me.

First couple months was spent flying around highsec doing missions and joining carebear corporations only to drop them after couple of weeks. After I was 3 months old I joined a corporation which after couple of weeks joined BDEAL alliance which at that time was part of CFC. So I moved to the far end of Fountain. I spent 3 months there. Did what all nullbears do. Quit after 3 months. Mostly beacuse my Ceo was a dick. Moved back to highsec, carebeared for another couple months, joined aother corporation and did some pvp there.

Corp joined S I L E N T alliance, and so we moved from Sinq to Taff in Metropolis. Spent a couple of months there. Was told off for dying stupidly on a regular basis, was told clearly that alliance doesn't like "silly" losses. Was desperate to learn how to pvp but felt like it wasn't the place for me. Moved back to highsec. Put some POSes up and started my own little enterprise. Made good iskies. When first rebalance hit TQ I was doing just that. But there wasn't much i could do with all that isk. So I started flying around Verge Vendor lowsec scoring my first solo PVP kills. Was regularly meeting Rixx around the area. Once SF was formed it took me 3 months to apply, but here I am.

How did you first hear about A Band Apart?

Had my spai in The Tuskers pushing all the drama to kick Rixx out so he could start his own corporation. Yes, Im taking full credit for creating Stay Frosty.

What is it that you enjoy the most about your Corp/Alliance?

Lack of dickishness and dickery. I've gained a couple of real friends here. The fact that I can undock a tristan with 15 fed navy webs in cargo, commit to a fight and die, and no one cries about the 1bil loss tristan on kb. Makes u feel good about loosing 1Bil tristan. Still got couple of those.

What have you learned since joining

Do you have any advice for players just getting started?

Relax, enjoy, have fun. Eve is game and treat it like it was a game.
"always be yourself unless you can be a pirate. Then always be a pirate"

What are your goals for yourself, and your Corp?

Some stuff which is top secret atm. Would like to see more FC's in corp. Would like to bring more elements to fruition which could help anyone who wants become FC.

Do you have a funny Eve story you can share?

Well... I wanted to cash all my Fed Navy LP. So I exchanged them for 3 Fed Navy web BPC's. Moved them to Ishomilken and made all 15 of them in the station next door. Brought them made in tristan. Logged for the night. Next day came from work, loged on. Saw Firetail in plex. Yes its what I have done. Took Tristan and got killed. Didn't notice untill the day after that, when finally started looking for those webs. Very Funny.

What is your favorite thing about Rixx? (lol)

There is not such a thing. Don't you know he is a paranoid delusional old prick.


Joking . Truth is he is good friend (or I am Rixx-washed?).
(EDITOR: Nope, truly a good friend.)

Join our in-game channels EVEOGANDA or The Frosty Hammer to learn more about A Band Apart.