Once again this year the CSM Candidates have come around to my CQ to ask for my endorsement of their campaign for the tenth Council of Stellar Management. I've spoken to almost everyone on this final list of endorsed candidates, some of them several times. If not recently, then in the the past. I know them, have worked with them, flown with them, or otherwise have had dealings with them. Not every one of the 77 candidates bothered to reach out and none of the ones who didn't are getting an endorsement either. It's part of the test people.

As in previous years, I have asked each one to (at least in spirit) join me for two special causes: Hats on avatars, and the Banning of Warp Core Stabilizers from New Eden. Each of those two topics are allowed various shades of gray, the point of each is to see how the candidate thinks, how they might work together on a team, and if they can take orders from me.(!)

We do not support Major Block Candidates. We strive for well-rounded, intelligent, and dedicated candidates that will help all of Eve and New Eden, both in-game and out.

As in years passed, the voting block of EVEOGANDA readers and fans will make a significant impact on non-block candidate campaigns. Additionally this year, we will be bringing our in-game forces to bear on this list as well. Representing as we do a rather large and active block of our own now. Woot Power!

Here are the official EVEOGANDA, Stay Frosty and A Band Apart CSM Endorsements:
[In order]

2. Corbexx
Also deserving of re-election, works well on the team and is primarily WH focused.

4. Mike Azariah
One of my oldest friends in Eve, Mike did a great job last year and deserves to be back.

5. Psianh Auvyander
I've been very impressed with Psianh's dedication, intelligence and open-minded approach to Eve and I believe he will make an excellent member of CSMx.

7. Klapen
Another Low Sec rep that has the right attitude and will work to protect the important things.

8. Bam Stroker
Community focused, I've known Bam for a long time and can speak to his integrity.

9. Cagali Cagali
Someone from BNI is going to get in, it might as well be Cagali!


It is critical that you vote at least your first five the exact order recommended above, the way the voting works is critical to getting our candidates in. Splitting votes, or changing the order, only works to help the massive Null-Sec power blocks and their candidates. And no one wants that. Think for yourself and vote the way I tell you!

Hopefully this year we can avoid the horrible Null-Sec influence that nearly destroyed the CSM's term last year. These types of things would not happen it everyone just voted the way I tell them.

As always I am joking about the funny bits, but dead serious about the endorsements. So get out there and vote. Vote with all your alts. And then vote some more. 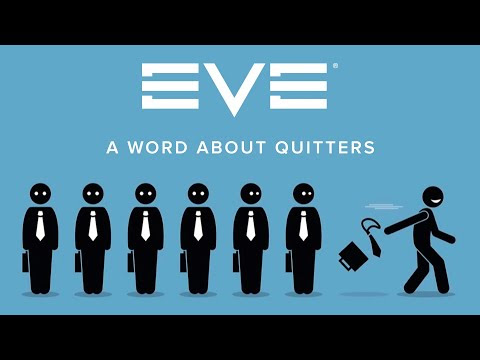 A Video about Quitters

Yesterday's post exploded a bit.  Rushlock kindly asked me yesterday over in the partner Discord if he could make a response video and I didn't hesitate to say, "yes please". I did so without knowing ahead of time which way he might lean in the video. It didn't matter to me, I'm always willing to support those in the community that are making content - if they agree with me or not. Agreement is not the most important factor to me. I could write an entire post about great debate and intellectual challenges (and I probably have) but that isn't the point of this post. Every morning as part of my ritual I try to get caught up on the goings on I missed by sleeping. I catch up on Twitter, Facebook, and other platforms to see if I missed anything or catch the current mood of things. Yesterday I happened to read a post over on Eve Facebook about someone leaving the game. Again. This specific post contained all the usual classic tropes, anger, multiple alt accoun