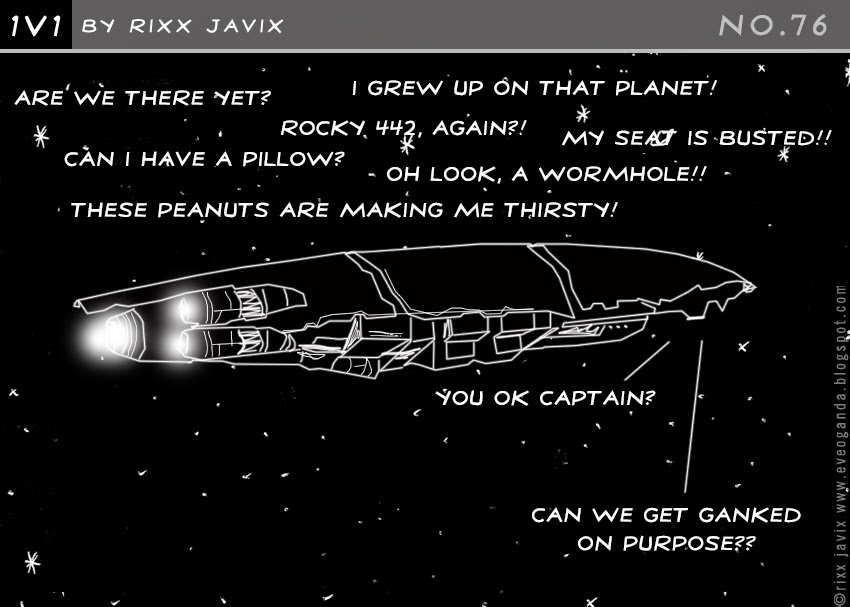 Even though EVEOGANDA didn't make Neville Smit's list of favorite sites doesn't mean we fired 75% of the staff yesterday and sold ourselves to a huge intergalactic media conglomerate or something. We remain, as always, fiercely independent and alone on our own island of insanity over here. As more and more of the Eve Community continues to join forces and become destinations, EVEOGANDA will remain a bastion of weirdness, bad jokes, tales of piracy, and pure genius. Cranking it out every day. Nose to the grind-stone.

Yesterday someone linked my 1v1 COMIC Page over on Eve Reddit, which brought about 10,000 new readers over to read the comics. So that was nice. The first Eve Comic was published in March 2010, which means those 76 panels have taken five years! Which is just insane when you think about it.

I think it is important to note that the EVE COMIC Series is intended to be bad, groan-worthy, and slightly off somehow. In fact, the worse the jokes are the more they make me laugh. I can't explain this, but that is the way it works. There are times when I purposefully skip the funnier lines and choose the bad ones. For some reason this is how I always saw it. It was intended as a lark. A trifle. And now I'm stuck with it.

And this is probably why we don't make anyone's list. And why all the crying yesterday in the offices. I feel bad for the staff, so many of them have families to support. I don't know what will become of them. Our headquarters is on a lava planet and I don't think they'll survive long out there.

Tongue firmly in cheek as always.