A Day in the Slicer 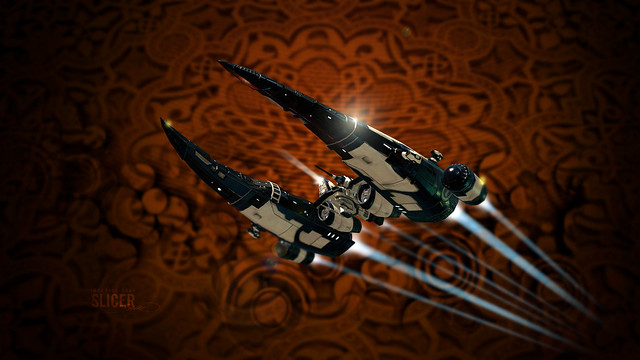 One of the many challenges awaiting those that choose the solo/small gang Pirate play-style in Eve is the availability of targets. You have no control over what, where or when opportunities will arise and present themselves. You can head to busy systems that might be empty, bait someone who must be afk, try to fight someone who simply runs away, run routes that typically harvest some opportunities only to find larger gangs and gate camps along the way. There are, quite literally, no end to the possibilities. This is both the challenge and the incredible variety that Eve offers on a daily basis.

It can often be insanely frustrating. And while every solo/small gang player will tell you it is all about patience - what they won't typically reveal is that even those of us with an Iron Will often lose our patience. We are only human after all. The other day, after a long and frustrating session, I attacked an Orthrus in my Thorax simply because I was bored. And I knew he had another Orthrus as backup. That is the action of a man who has lost his patience.

That is why yesterday I chose to fly a ship that requires patience, as a sort of penance for my lapses the day before. Choosing which ship to fly every day is an expression of a larger story, a tapestry of tales if you will. So yesterday I chose the Slicer because it requires extreme levels of patience in order to avoid being exploded. Not to mention how fun it is to fly. The Slicer is challenging. Fast, lightly armored, relatively low dps, insanely short cap life, and prone to acts of awesome - it was the perfect ship to bring me back to a more balanced approach. At least that was the intention.

It all sounds good in theory. In practice however? System after system was empty, or full of large gangs and linked trap baiters, or stabbed farmers, and tons of other opportunities that the Slicer was not intended for. What started as an act of patience was quickly turning into yet another act of frustration. I kept telling myself to be patient.

And then I jumped into Manjo and there was only one person in local and a quick d-scan revealed the Algos. And at that moment both sides of opportunity knocked hard in my head. Patience said, "Wait! This is the exact sort of crap you always do and you are going to die in a ball of fire!" While opportunity said, "Sure you might die, but then again... you might not. Plus, I'm bored!" So I hedged my bets, I announced in fleet chat that I was going to probably die, but that I was going in anyway. And so I did. It would be the adult thing at this point to warn the young among you that jumping a Slicer into an Algos is a bad idea. This will not normally work out well for you. Do as I say and not as I do. So I did it anyway.

Fighting a larger or tougher ship in a Slicer is challenging, as I've mentioned before. The key is battle management, nursing your cap, expressing your distance and ammo choices (I sometimes change ammo multiple times during a long fight), and hovering right on the edge of one lone solitary orange dot of capacitor. That one dot can run one thing, choosing which one thing to run is the key to not only winning a fight, but living to talk about it. Run the guns, run the repper, kill the point, cycle the mwd, rinse and repeat. The great thing about the Slicer is just how close to the edge of failure it always is. At any moment I'm going to miss a cycle, or run the wrong thing, and get caught. It is a rush. And I love the ship for it.

Oh and the Algos exploded. I was in 32% structure and my Slicer was on fire, which it always is after a fight.

I killed nine ships with it before I got caught by a Comet. Shortly after the Algos fight a Thrasher attacked me on a gate, and paid the price. The only other fight worth mentioning is the one right before the Comet. By this time we were in a small gang of us doing the Stay Frosty sweep when we happened across on Eris sitting 100+k off a plex gate. Only two of us were really fast enough to try for it and luckily one of us was in a Dramiel. I say lucky because the Dramiel distracted the Eris pilot long enough for me to kill him. I learned that later on.

While I have killed Comets in my Slicer before, generally I avoid engaging them as much these days. Blaster comets are rare, and most people are fitting rails, that being the primary reason. Plus I don't fit my Slicer the same way I used to, so switching to a brawling situation is not a good idea like it used to be. I still tried and it finally caught up to me. As it always does eventually.

I did log on later and hero tackle an Osprey in my Tristan. Those two neuts really made things difficult. Did I mention that I love Tristans too?