Flashback Sunday: X Up For Defense 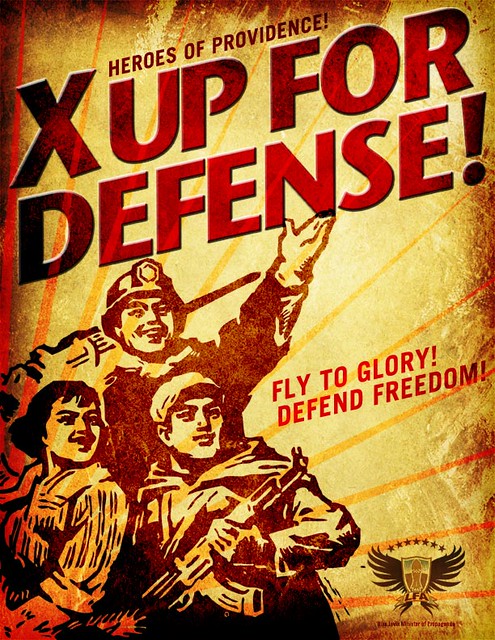 When I look back on it with the power of hindsight, this piece is really when things started to make sense when it came to mixing Eve with Fan Art. Back in early 2009 I was serving as the self-proclaimed "Minister of Propaganda" for the LFA Alliance as part of the CVA Provi Bloc (the better original version of that!). I was testing the waters by creating posters and posting them on the forums, this is almost a year before this magazine would be born.

For some reason this specific poster caught the attention of people outside of the forums and spread to a wider audience. I believe a few blogs picked it up and it was posted on other forums. And then Richie Shoemaker from EON Magazine contacted me and asked if I could make a hi-res version to appear in the publication. That is the version seen above.

Not only did this help me understand the larger community of Eve, but also started a relationship with EON Magazine that would last up until it stopped publishing. (Which is still a serious bummer!)

Just the other day a bunch of Provi Veterans convo'd me in-game, it was great to see so many familiar faces and catch up with them. We had an amazing thing going down there for a short period of time, a true PvP playground in which a young player could learn and try a wide variety of play-styles. So many of those I played with have gone on to remain important in the Eve universe, ProGodLegend, Makalu, and many others.

I still get a shiver of excitement when I hear the words "X up".