on November 27, 2015
Given everything that has happened this week, I figure it is only a matter of time before someone somewhere points fingers and tries to paint me with a "grr Goons" brush. I mean, let's be honest here, it has already happened over on Crossing Zebras and on Reddit to a certain degree.

For those so inclined I would like to mention a few things. One of which begins with a rather famous picture. 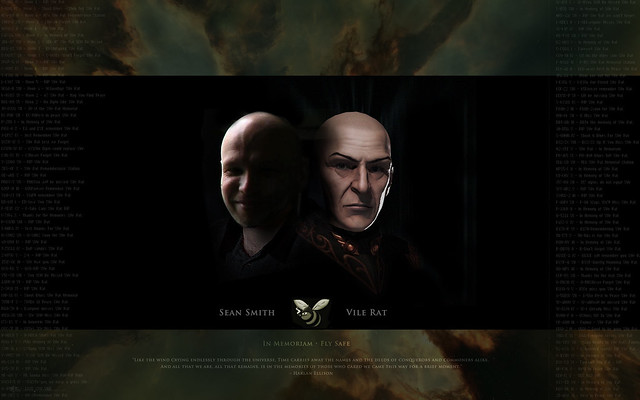 If you've been around Eve for any length of time you've seen this image. It has been posted everywhere, on blogs, on TMC itself, and pretty much anywhere else you can think of. I was proud to do it and still am. Sean was a member of our community and his death was a crossroads for many of us. A sign of how important our real lives truly are, the lives behind the screens, how united this community can and should be, and just how important it is for us to remember those who are no longer with us.

I mention this because Sean's senseless loss galvanized a campaign that I was running at the time for a player memorial. You can watch videos I created that also mention his passing. All of which has something to do (who knows exactly what or how much) with the creation of the Eve Player Memorial in Iceland.

Let me be clear here. I am not pro-Goon either. The entire reason for their existence is anti-Rixx. "We're not here to ruin the game, we're here to ruin YOUR game" is not pro-Eve, pro-Community, or pro-anyone other than themselves. And I've called this out at various times here in this blog for valid reasons. And I make my living in Eve as a scum-sucking Pirate in low-sec. I know a few things about how to get what you want in Eve without being a dick about it. It is, after all, the entire mission statement of A Band Apart and Stay Frosty.

"Don't be a dick" is the counter to ruining your game. And personally I find it extremely encouraging that the "meta" in Eve has turned over the past four years. The Space Clique that runs GSF probably hasn't noticed it, but the over-arching meta in the Eve community has moved on. They are out-of-touch now. And they have no reason to exist. The underlying structure that created them in the first place isn't there anymore. The fact that the Imperium exists at all right now is a testament to nothing other than greed and arrogance.

As for the line members? They are Eve players just like the rest of us. Most of whom probably don't follow blogs, or pay attention to the changing sands of the Meta, or really care much one way or the other. I've never had a problem with any of them. And still don't.

As for where I stand? I stand where I have always stood. It is up to the players to decide, as it always has been. If players want to be a part of what is going on with those in charge of GSF/Imperium, then that is their right. All I can do is to continue to offer my own opinion over here in my little corner of the universe.

There is no "grr Goons" around here. There is only a concern for what is best for Eve and my fellow players.