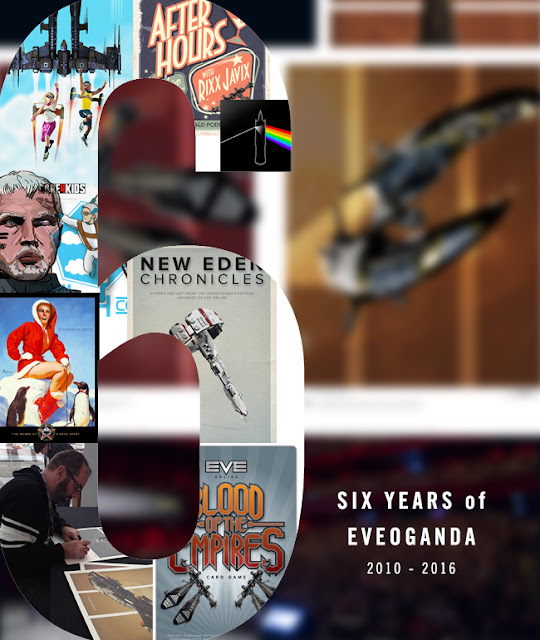 In January of 2010, after almost two years of playing Eve and reading other people's blogs about Eve, I finally decided to take the plunge and start my own. Back then I had no idea what I was doing, other than one goal - to have fun and share my adventures. I was directly inspired by other bloggers, CrazyKinux, Kirith, Roc, and many more that have since grown silent. A lot has changed, both in-game and out here in the Eve community since then. I've changed as well. My own life has gone thru catastrophic and gut-wrenching changes in those years. For good and for not-so-good. In so many ways, this place has been my own personal therapy, a place to express myself daily, to stretch the boundaries of my own creativity, and a fulcrum around which I have made many lasting and meaningful friendships. Some real, some imaginary, some virtual, but all of which have added up to a great adventure that I wouldn't trade for anything.

1,787 posts. Which is a yearly average of nearly 300, gulp. Thousands of images, logos, parodies, comics, wallpapers, videos, and god only knows what else. And soon to be a new venture into the world of Podcasting with the "After Hours with Rixx Javix" podcast, coming soon™! Where will we go next? In many ways, nothing much has changed since that very first day. I still don't have a plan. But my goal has remained the same, to entertain, to have fun, and to share my adventures with you.

Thank you for reading along and for sharing my adventures with me. This place has never once felt lonely or isolated, because of you. I write and draw and have fun alongside my readers, each and every day. And for that I am eternally grateful. Even for the Anon comments and the anger hate that pops up every so often. People are very passionate about Eve and I can appreciate that. In that way, we all share something in common.

I hope that we are all here to celebrate another six years!


PS: The actual anniversary date is tomorrow, January 19th. But sadly I'm being dragged back into court tomorrow and I'm not sure I will be able to post. So I cheated a tiny bit.