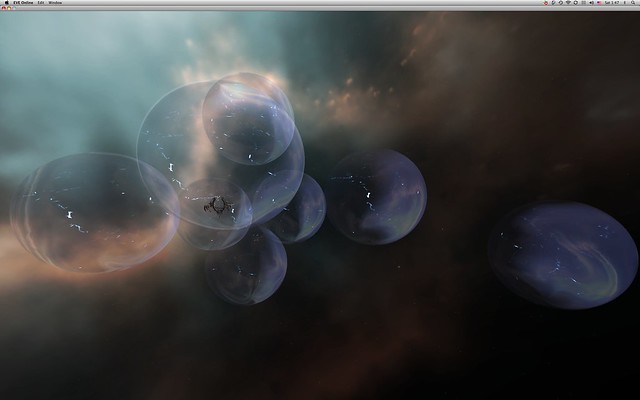 During my interview with Fozzie on the After Hours Podcast we got around to talking about the upcoming changes to off-grid links and boosters in Eve. As many of you already know, CCP has confirmed that links will be moving on-grid here in the near future. This move has been the fountain of much speculation since off-grid links were first introduced ages and ages ago. CCP has long maintained that the issues involved ran much deeper into code and technology than might be assumed and these hinderances were stalling any significant changes.

Those "walls" seem to have been removed with recent server upgrades, the introduction of "brain-in-a-box" and other changes. And we appear well on our way towards an entirely new way of thinking about links and boosters inside of New Eden. I recommend listening to the entire Podcast, but I'm going to go ahead and discuss the changes specific to on-grid links.

As Fozzie himself said, it is easier to consider the future of on-grid links if we think about the way Dictors are currently used. A Dictor can deploy a warp bubble and then fly away from it and leave the bubble where it was deployed. This seems to essentially be the idea behind on-grid links in the future. I'm sure the details will change in the coming months, but this idea is rather ground-breaking from a strategic and tactical perspective. If link effects become essentially Area-of-Effect boosts, a deployable effect, that the link ship can move away from - well that fundamentally changes the entire way we think about them inside of the game. To add further fuel to the fire, it appears that they also intend to move links out of Wing Command and Fleet Command positions within a fleet, essentially meaning that anyone inside a fleet can apply links. This change means you could have entire squadrons of Command Dessies or T3 Cruisers as link ships in your fleets.

Obviously this is very early news on the development front and many questions remain unanswered. How large is the AOE? Do skills determine the range? How long does the effect linger? Do only ships in your own fleet gain bonuses? (You'd think yes, but again, this wasn't addressed.) And is the effect visible to others? This last one is rather critical, as a visible effect would mean enemy ships could also try to avoid the link bubbles.

I'm also guessing that any ships exploded under the effect of the link bubble would show the link ship on their killmails. This is obviously something that I've wanted to happen for a very long time. But right now that is only a guess. It makes sense however.

As I said in the interview I am very encouraged by this direction. It means risk is re-introduced into Eve for link ships. And yes I know, they can be hunted down and removed with a lot of effort. The fact remains that off-grid links are relatively safe and impact fights significantly. The risk/reward bonus is highly in favor of those deploying them and against those that are not. This has created a significant problem for years. Removing that safety net and forcing links onto the field of battle, where they rightfully belong, is a huge step in the right direction.

We'll have to wait and see as more details become available in the coming months, but generally speaking I am a huge fan of this direction. It is a very Eve direction. Something that the previous system was not. No matter what side of the fence you come down on, you can't argue with that. Allowing an entire ship class to essentially avoid commitment and still be engaged in battle was and should never have been - Eve.

Links are about to become just another fleet comp decision. And I'm a big fan.