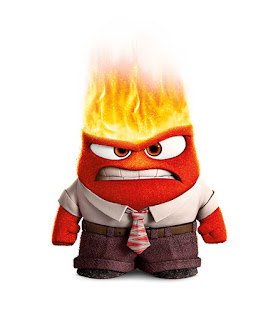 Have you been on Facebook or Reddit in the last few days? Sheesh, talk about anger. There are some truly hostile, angry, mean, and often personal things being said about certain people at CCP. It doesn't even matter why, or what, or any of the reasons for it. That isn't the point of my post today. Just keep that in mind as we move forward. Hundreds of people, anger, vile words, and Memes, and whatnots.

Now that we have the proper mental picture, let us reflect on your friendly neighborhood blogger over here on Eveoganda. Generally regarded by most as a decent enough fella. Given to troublemaking tendencies sure, but always with the greater good in mind. He gets mad sometimes, but its always about making Eve better. Gooder even. Putting Frills back on Vagabonds. Hats on avatars. Opening doors. And often advocating for a better Eve Store experience.

Oh and I make arts. And videos. And I have this podcast. Etc.

Back when I started this blog I was just a faceless player starting his adventures in New Eden. Over the years that has transformed a bit, mostly just due to pure hard headedness on my part. Stick around long enough and stuff is bound to happen. Along the way I made fun of CCP sometimes, they banned my store, I made Frills on Tweetfleet avatars, they did their thing and I did mine. It wasn't until they called me one day to suggest we do some work together that things changed. For awhile there I seemed like a golden boy, shit was tight. Suddenly my support tickets got answered right away. Finally, after years of rejection, the logs finally showed things. My art hung on the o7 Show walls for over two years. I was in like Flynn. And then things went the other way rather quickly.

No need to re-hash old news. So lets skip ahead a bit and reflect on the following photo. Please keep in mind the Facebook/Reddit anger thing I mentioned earlier. 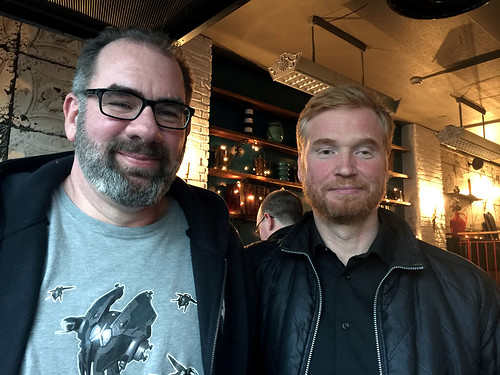 So that's me (on the left) with Hilmar (on the right) at Nora's in Reykjavik the night before Fanfest. He walked in and after a few minutes I went up and we started talking for about fifteen minutes or so. We even had a nice laugh about the time he shot me down at the Charity dinner in 2015. I felt comfortable enough to invite him to join me on After Hours to talk about the legacy of Eve and the early days. Anniversaries are coming up and he seemed genuinely interested in doing it. Send me an email he said, and my people will work out my schedule.

You see even with all the crap that was going on at the time, I'm still just a big old goof. I figured all this stuff was behind us and we'd all just move on down the road like adults.

Uh no. What you don't know is that I did send that email and I got an immediate reply. You see Rixx has been a bad boy, he wrote bad things about CCP and the store and the Art Posters. All of which was true, but never mind that we are putting him on super secret probation. Although we are not going to call it that. So non-super secret probation. Either way the results are the same.

So no to having Hilmar on the podcast. My art came down off the walls of the o7Show in case you didn't notice. My segment "Hauling Thoughts" nowhere to be seen. (And no word from anyone on that either btw, it just didn't air.)

So yeah. Lately I've been struggling a bit with what this means going forward. What role do I have now, what should I write here in these pages? I criticized a company that makes a game I love for doing nothing for a year, keeping my mouth shut about it for a YEAR, until I finally had enough. Dealt with it. Like an adult. And then sat thru a horrible roundtable with twenty other players all of whom felt exactly like I did. And wrote a well-reasoned and logical article about it.

I'd rather do this stuff with them, sure. But they don't need to be there. And given the childish and often immature ways in which they seem to handle things, maybe I'm better off without them.