on March 26, 2019
I was sitting next to my Wife when the news came over Twitter. CCP Guard would be leaving CCP and Eve Amsterdam would be his final "official" player event. Two things immediately popped into my head, 1) We needed to go to Amsterdam, and 2) I needed to do something special for the event. I ran to my studio and started hitting up Discord. I wasn't the only one with an idea that something needed to happen and suddenly, as is often the case, things started happening within our community. While I was waiting to hear back I started playing around on the computer. And the idea for this illustration sprang fully formed into my head.

Having just been to Eve Vegas and watching Guard up on stage (for the fourth time) really drove the concept of this Rock God idea. I wanted to create a rock poster that featured him doing what he does, but conceptually I also wanted it to be about more than just singing. To me the genesis of the concept is this light show cloud from which springs forth all manner of things. To me it symbolizes what he has done for the Eve community all these years. His power fuels us all. And, you know what, I think I managed to capture all of that.

We were up against a hard deadline. The poster took me two full nights to complete, during which plans started to form. Jake Miester started raising some funds to come up with something to give Guard as a gift. Bam Stoker and Ms Moses were busy with a compilation video from players ( I recorded something, but I guess I didn't make the cut ) and others as well. So Jake and I schemed a way to make this happen under a very tight deadline. I sent him the digital files and he got it printed over in Europe. The final poster was finished and delivered with very little time to spare.

Jake did an amazing job of organizing things and making sure that everyone got to sign the back of the final piece. Even though I ended up signing for about 10 people who couldn't make the event myself. And then I wrote something short for the back with Jake's help. My Comic Book Lettering skills, while rusty, certainly helped.

This is what I wrote: 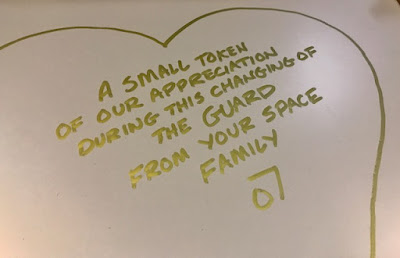 We were told not to speak while on stage presenting our gifts. Of course I never listen. I only managed to say one sentence and it was, "This is from everyone." Later I explained it more fully when I told Guard that the illustration was from everyone in the Eve Community. Not just Jake and myself. That's how I feel about it. I didn't think of this, create it, and travel all the way to Amsterdam for myself. I did it for all of us, because I could. 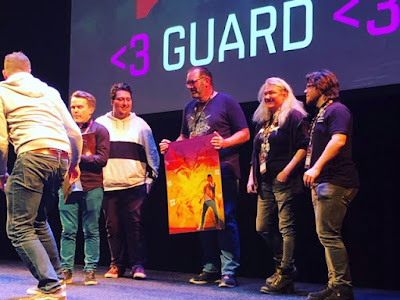 I also created 400 Guard buttons so that everyone at Evesterdam could have a memento of Guard to take home with them. Which I thought was pretty cool.

So that's the story of that moment in Eve History.

And not to slight Jorg, FieryRed, or Sebastian who also had gifts to give him. Those are their stories to tell.

o7 Sveinn Kjarval and best of luck to you in your new job. No one there knows how lucky they are to have you yet. But they will soon enough.