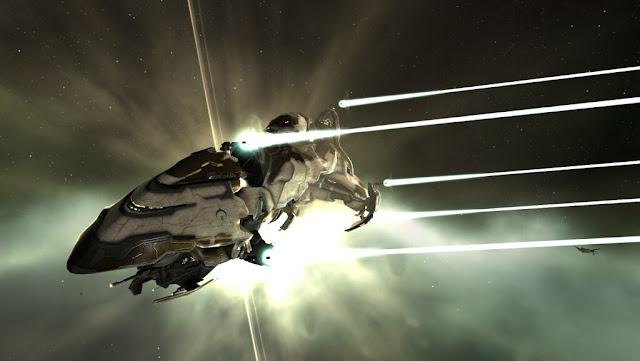 So yesterday this happened.

I never post kills in order to shame anyone on this blog. However, kills are public knowledge and this one is sitting on my kill-board today. And, if by chance, this pilot happens to be reading this - please know that I am discussing it simply as part of my story. And hopefully, you might learn something useful that can help you avoid this kind of thing in the future.

So a little context first. It was a very quiet night in the neighborhood. I had started out the evening down in Minnie space from a roam we did the night before. Where we got a few good kills like this Dramiel, and this Gnosis among others. So I grabbed a ship and started making my way home. Hoping I'd run across some fights along the way. Sadly, nothing. We had a few people around in our main home system so I fitted up some ships and waited for things to get busy again. I tried going around in a Comet and stir up some trouble, but nothing was happening.

And then, as usual, things started picking up again. By this time my fellow Stay Frostian FireSequence had joined the party and we started picking up some targets on scan around the neighborhood. But no one seemed to want to fight. There were three Panic Attack pilots in a Drake, Talos, and Vexor but they kept jumping around and we couldn't get them nailed down. A Moa was also around from another corporation. And various ships coming and going. Pretty typical hunting environment. By this time I had jumped into a Stabber since most of the targets seemed to be Cruiser sized and larger. FireSequence was in a Vexor. A couple of other pilots had also joined the gang by this time and both were hanging out next door. (I'm keeping a few details OpSec here by the way.)

I started baiting in the Large Plex hoping one of the passing ships would take an interest in my Stabber. Just so you know, I don't fly Stabbers very often. Typically if I pick this hull to fly it'll be in a Stabber Fleet Issue which is one of my favorite ships in Eve. But I like the Stabber and I hadn't flown one in a long time, so that's why I had picked it. It wasn't bling fit or anything special, just a pretty normal passive shield max damage AC fit. FireSequence thought a target was in a belt and said he was warping over to take a look. That's when the Legion de-cloaked inside the large. Now I had seen the Legion on scan at various times but we didn't know the pilots name and had lost track of it, so this wasn't totally unexpected. But knowing that backup was in warp to a belt and the fact that he was pretty far off, made me decide to warp off for the time being. I warped out to a nearby celestial and waited to see if Fire had landed a target. He didn't. The belts were empty.

The Legion had disappeared from scan. When you've been doing this as long as I have you can just tell certain things. This isn't always accurate, but it sure felt like he was just lurking in the large looking for easy kills. So I warped back at the same distance as before and slowly started orbiting the plex. Everyone else was ready to jump in to assist. I was anticipating this was going to be a tough fight.

Sure enough, he de-cloaked once again and started engaging. My only goal was to get point and keep him from running away. So I burned under him and managed to get point, engage my guns, my drones, and even get a web on him. And that first volley hurt, but with my MWD on my sig radius was huge and I fully expected it to hurt. But by the time all of this was just started to register I realized something else... he was dying. And fast. He turned on his neuts late, but by then it was already over. I overheated the rack and he popped just as help arrived.

For those of you reading that don't know, polarized weapons produce a tremendous amount of damage. They are awesome in many applications. But they come along with a very serious drawback that must be carefully considered before using them - fitting polarized weapons on your ship reduces your resistances to ZERO across the board. Zero shields, armor and structure resists. All you have is native values. No resist percentages. At all. So any old damage type does max damage against you. And the truly important part of this educational lesson is that you cannot do anything about it.

So that faction resist mod and the reactive armor hardener in the lows? Useless. He might as well have left those slots empty. They simply don't work because he had polarized weapons fitted in the highs. Fitting those has a cascading effect as well, and I doubt either of his two faction armor reps had much of an effect on his armor hitpoints either. Armor reps need something to chew on and this fit was counter to that. Hence he died to a passive AC Stabber pretty damn fast despite being nearly 10x more expensive. (Maybe more)

What can we learn here? First of all this represents a very common and easily avoidable mistake that pilots often make - which I call chasing the deeps. When using a fitting tool it is easy to find yourself suffering from tunnel vision when it comes to DPS. Making a fit that has good DPS is important, but not at the expense of other attributes. This can result in ships with big guns that can't hit the Frigates you are fighting. Or polarized Legions. I would bet that this pilot didn't even notice the lack of resists in this fit. Either that or he doesn't properly understand the importance of those percentages. It happens.

Years ago when I was first starting out a friend undocked an Onyx and let me shoot it with my Drake. His resist profile was in the high 90s across the board. I shot him for a very long time and his tank wouldn't move. It was a great lesson for a very young pilot. Resists are incredibly important and an often overlooked part of every fit. Be aware of all aspects of your fit. Keep in mind the intended purpose and make sure your fit addresses that purpose.