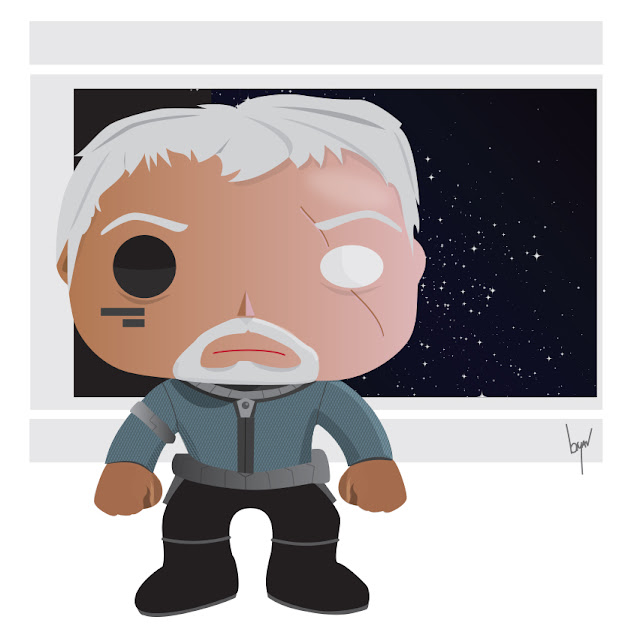 Eleven years ago my Son called me into his room and showed me a spaceship spinning in a station. He then undocked that spaceship into the dark vastness of space and what I saw hooked me for the next eleven years.

Together we flew in Wars as both defenders and conquerers. We helped save Providence and helped to destroy it, a few times over. We took Sov, both by force and by intent. We logged in simply to make sure skills kept training. We gate camped, we died by Titan area of effect weapons, and we watched as Wormholes, T3 ships, and more entered the game. We started corporations and closed them. We had a blast trying new, bold, interesting, crazy, and weird things - just because it would be fun to try.

I was once asked to prepare a proposal for my company to run the social media and PR efforts for CCP Games.

One day I decided to start writing down those adventures in an online journal I called EVEOGANDA. A place to share our adventures, and some of the weird propaganda work I had started doing for Alliance forums.

I created ads and wrote stories for a print magazine called EON. I was paid in iskies.

I believe that in the past eleven years I've literally spent millions of hours staring at spaceships in space, in station, and in real life. It didn't take long before I started drawing what I saw. One Summer I went insane and drew a LOT of spaceships trying to learn how to do it better. Those illustrations garnered some attention and before long CCP noticed.

I went to my first Fanfest in 2015 where I met the first other person who played Eve. Soon I met hundreds more. I had dinner with Seagull and lunch with Torfi. I gave a player presentation about Fan Art and sat with Andrew and Spitfire at a round table afterwards. I was on Eve TV live sitting next to CCP Guard. And I spent two days signing autographs on posters I illustrated that were being sold at the store!

During the Summer of Rage (Incarna) I started putting hats on my Twitter avatar and before you knew it I had put hats on over 500 other player avatars.

When the Stabber model was updated an Art Director at CCP forgot to include the frills on the Vagabond. I helped organize a community protest that resulted in them being added back, where they remain to this day.

I organized and ran several Death Races in-game, the first one ran thru Providence and maybe had a hundred pilots attend. The last one had over 400 attendees.

I organized and ran several Frigate Free-For-Alls that created extremely large red dots of destruction on the Eve map. The last one resulted in over 4,000 ship explosions. And Stay Frosty handed out over 1,000 FREE fully fitted Frigates that day.

I helped someone create a browser based side-scrolling Eve game. It worked for about three days until CCP made us take it down.

You can't travel around the Eve community without bumping into my work. In every corner you travel you are probably looking at something I created. That's pretty awesome.

I've been to three Fanfest in Iceland. I stood on top of a volcano. I've been all over the island, to the far east and far west. My wife and I have traveled to Amsterdam, Vegas, Toronto, and Alaska. And we consider hundreds of Eve players to be our dear friends. Some we've met, and some we have yet to meet.

And one day I decided to start a new corporation called Stay Frosty. Soon that grew into an entire Alliance. For the past almost seven years that group of misfits has been my pride and joy in-game. We may be "idiots of no consequence" as a trust-fund baby once described us, but we've accomplished a lot in those years. We've had solid runs in the Alliance Tournaments and in other Tournaments that have resulted in some of the most fun I've ever had in-game. We've taken Sov for fun. We've annoyed the Hell out of certain people. And we've outlasted every single one of our enemies who at one time or another promised our failure, or defeat.

For fun once I played a major role in starting a major war. For fun once I wanted to see how hard it would be to manipulate the person in Eve that everyone seems to think is the game's best manipulator - it turned out to be comically easy. So easy in fact that I lost interest in the so-called "meta" game and haven't been interested in it since.

We've had Eve players over to our home. Four times.

Funny. I didn't start writing this with the intention of listing off things I've done or experienced in the last eleven years. I truly didn't. But eleven years is a long time and I've done a lot of things I'm proud of. And a few that I am not proud of. I've made many mistakes. I also often let my depression and anger over my real life situation bleed into my game. It is challenging to keep the two apart. As much as we try, real life and Eve life are truly one and the same. I haven't always been the best version of myself. I realize, looking back lately, how unlike myself I have been from time to time in the past. Out here in the real world I had a rough fourteen years, a run that started well before I found Eve and this great community of ours.

If, at any point during the last eleven years, I've said or done anything to offend or hurt you - I sincerely apologize. That was never my intention.

Except for a few people.

I wanted to learn what an MMO was. And I wanted to find my place. And have fun. And help others. And live life to the fullest.

If you've read this far, thank you. Thanks for reading and for following along on this crazy adventure. If you are new here, then welcome aboard. I have no idea where the next eleven years are going, all I know is that I'll still be playing Eve. If it is still here. And if I am.